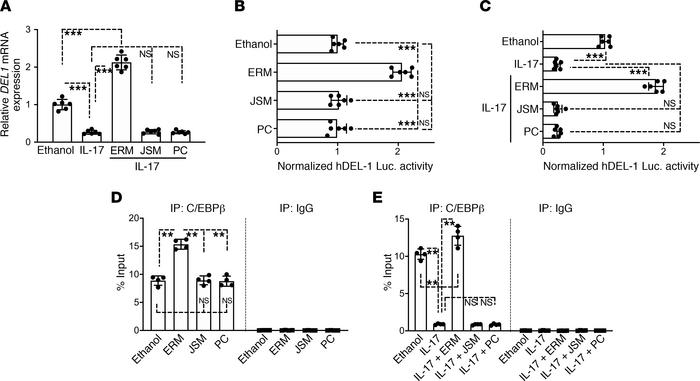 () HMVECs were stimulated as indicated for 4 hours in the absence or presence of IL-17 (5 ng/mL). Prior to IL-17 stimulation, the cells were pretreated for 30 minutes with ERM (10 μg/mL), JSM (10 μg/mL), or PC (10 μg/mL). mRNA expression was determined by qPCR, and data were normalized against mRNA and expressed as fold induction relative to ethanol treatment (vehicle control), which was assigned an average value of 1 ( = 6 sets of cultures/group). ( and ) HMVECs were transiently transfected with hEDIL3-promoter-Luc reporter plasmid, pretreated for 30 minutes with or without ERM (10 μg/mL), JSM (10 μg/mL), or PC (10 μg/mL), followed by 8-hour stimulation with or without IL-17 (5 ng/mL), and analyzed for luciferase activity. A Renilla luciferase construct was cotransfected as an internal control for normalization. Data are presented as fold change relative to ethanol control treatment, which was set as 1 ( = 6 sets of cultures/group). () ChIP analysis of C/EBPβ occupancy at the promoter in HMVECs treated for 4 hours with ethanol control, ERM (10 μg/m), JSM (10 μg/m), or PC (10 μg/m) ( = 4 sets of cultures/group). () Same experimental setup as in panel , with included stimulation with IL-17 (5 ng/mL) for 4 hours following 30 minutes’ pretreatment with ERM and controls ( = 4 sets of cultures/group). Nonimmunoprecipitated cell extracts were used as input samples. In the experiments whose results are shown in , , and , sequential treatments were performed without intermediate washing steps. Data are expressed as percentage of input. Data are presented as the mean ± SD. ** < 0.001, *** < 0.0001 by 1-way ANOVA followed by Tukey’s multiple comparisons test.