Obesity predisposes to cancer and a virtual universality of nonalcoholic fatty liver disease (NAFLD). However, the impact of hepatic steatosis on liver metastasis is enigmatic. We find that while control mice were relatively resistant to hepatic metastasis, those which were lipodystrophic or obese, with NAFLD, had a dramatic increase in breast cancer and melanoma liver metastases. NAFLD promotes liver metastasis by reciprocal activation initiated by tumor-induced triglyceride lipolysis in juxtaposed hepatocytes. The lipolytic products are transferred to cancer cells via fatty acid transporter protein 1, where they are metabolized by mitochondrial oxidation to promote tumor growth. The histology of human liver metastasis indicated the same occurs in humans. Furthermore, comparison of isolates of normal and fatty liver established that steatotic lipids had enhanced tumor-stimulating capacity. Normalization of glucose metabolism by metformin did not reduce steatosis-induced metastasis, establishing the process is not mediated by the metabolic syndrome. Alternatively, eradication of NAFLD in lipodystrophic mice by adipose tissue transplantation reduced breast cancer metastasis to that of control mice, indicating the steatosis-induced predisposition is reversible. 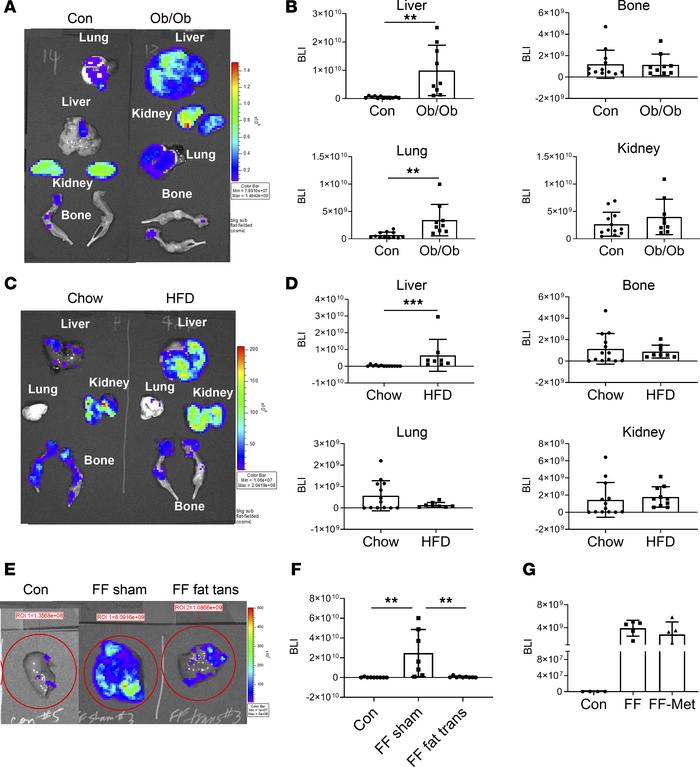