Off-tumor targeting of human antigens is difficult to predict in preclinical animal studies and can lead to serious adverse effects in patients. To address this, we developed a mouse model with stable and tunable human Her2 (hHer2) expression on normal hepatic tissue and compared toxicity between affinity-tuned Her2 chimeric antigen receptor T cells (CARTs). In mice with hHer2-high livers, both the high-affinity (HA) and low-affinity (LA) CARTs caused lethal liver damage due to immunotoxicity. In mice with hHer2-low livers, LA-CARTs exhibited less liver damage and lower systemic levels of IFN-γ than HA-CARTs. We then compared affinity-tuned CARTs for their ability to control a hHer2-positive tumor xenograft in our model. Surprisingly, the LA-CARTs outperformed the HA-CARTs with superior antitumor efficacy in vivo. We hypothesized that this was due, in part, to T cell trafficking differences between LA and HA-CARTs and found that the LA-CARTs migrated out of the liver and infiltrated the tumor sooner than the HA-CARTs. These findings highlight the importance of T cell targeting in reducing toxicity of normal tissue and also in preventing off-tumor sequestration of CARTs, which reduces their therapeutic potency. Our model may be useful to evaluate various CARTs that have conditional expression of more than 1 single-chain variable fragment (scFv). 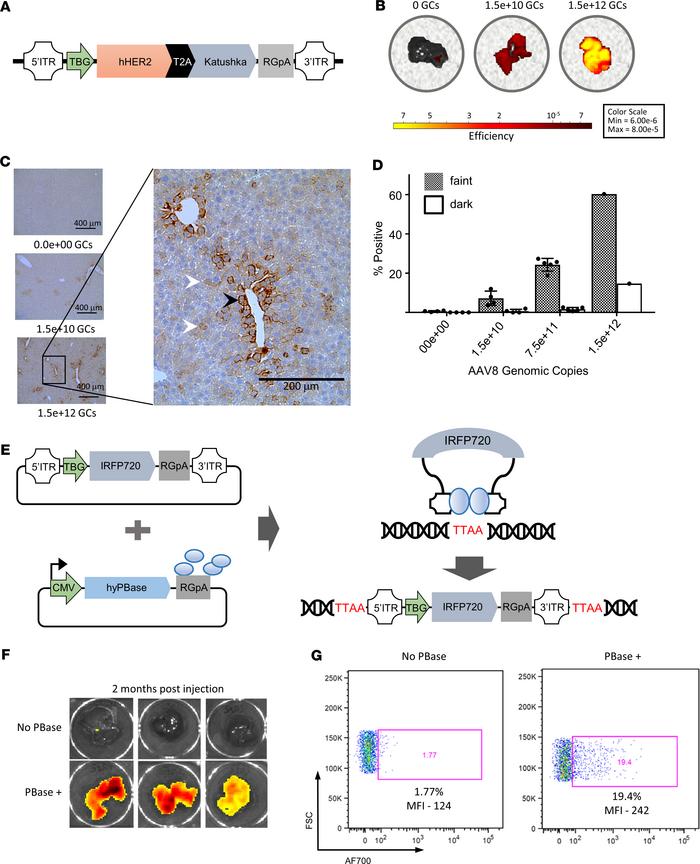 () Design of the AAV8 vector, which includes a truncated human Her2 gene (hHer2) and a fluorescent reporter gene (Katushka) that are expressed by the liver-specific thyroid hormone-binding globulin (TBG) promoter. Mice were i.v. injected with AAV8, and their livers were harvested 1 month later. () IVIS imaging of fluorescence in ex vivo livers harvested from mice that received either no genomic copies (GCs), 1.5 × 1010 GCs, or 1.5 × 1012 GCs of AAV8. () Immunohistological assessment of hHer2 expression in mice that received either 0, 1.5 × 1010, or 1.5 × 1012 GCs of AAV8. Darker Her2-stained cells have a perivascular pattern (black arrowhead) and are less frequent than the fainter Her2-stained cells (white arrowheads). Scale bars: 400 μm (left) and 200 μm (right). () Mean hepatocytes ± SEM were quantified for dark or faint Her2 staining by digitizing the IHC images using ImageScope and then analyzed using Aperio imaging software. Each group contained 4 mice except for 1.5 × 1012 GC, which had an of 1. () Overview of gene editing using the piggyBac transposase system. The transposon vector contained a fluorescent reporter gene (IRFP720) that was expressed using the liver-specific TBG promoter. () Imaging of 6 mouse livers harvested 2 months after injection with the IRFP720 fluorescent reporter plasmid and either with or without the PiggyBac transposase DNA vector. () Detection of fluorescent reporter expression by flow cytometry in isolated mouse hepatocytes representative of the livers shown in