Extramedullary hematopoietic cells are present in the liver of normal neonates in the first few days of life and persist in infants with biliary atresia. Based on a previous report that liver genes are enriched by erythroid pathways, we examined the liver gene expression pattern at diagnosis and found the top 5 enriched pathways are related to erythrocyte pathobiology in children who survived with the native liver beyond 2 years of age. Using immunostaining, anti-CD71 antibodies identified CD71+ erythroid cells among extramedullary hematopoietic cells in the livers at the time of diagnosis. In mechanistic experiments, the preemptive antibody depletion of hepatic CD71+ erythroid cells in neonatal mice rendered them resistant to rhesus rotavirus–induced (RRV-induced) biliary atresia. The depletion of CD71+ erythroid cells increased the number of effector lymphocytes and delayed the RRV infection of livers and extrahepatic bile ducts. In coculture experiments, CD71+ erythroid cells suppressed the activation of hepatic mononuclear cells. These data uncover an immunoregulatory role for CD71+ erythroid cells in the neonatal liver. 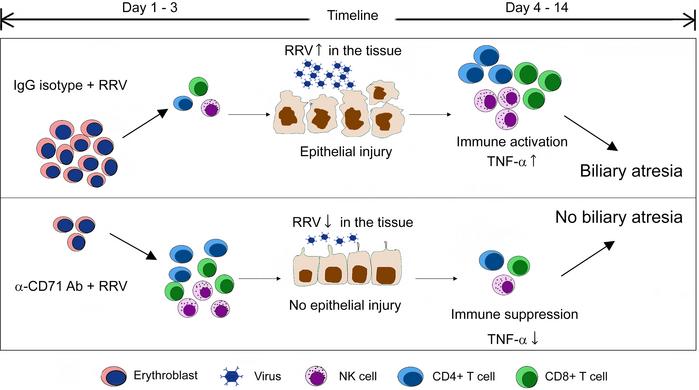