CSE identified as a potentially novel target of β-catenin and FoxO3 in PT cells. 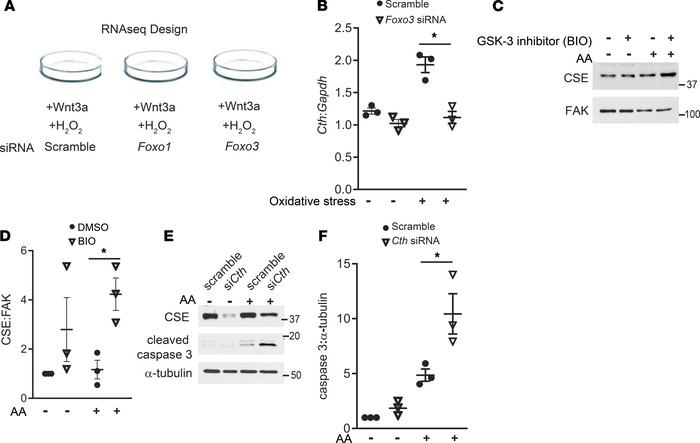 () RNA-Seq was performed on PT cells transfected with , , or scramble siRNA, treated with Wnt3a 20 ng/mL and H2O2 100 μM in serum-free medium for 16 hours. () , the gene for CSE, was validated as a target for β-catenin and FoxO3 using PT cells. The cells were transfected with or scramble siRNA, then treated with Wnt3a (20 ng/mL) in the presence or absence of oxidative stress (100 μM H2O2 in serum-free medium) for 24 hours, and transcripts were measured by qPCR and normalized to (). * < 0.05 using the Student’s test. () PT cells were treated ± AA at 30 μM for 7 days with a GSK-3 inhibitor added for the last 2 days, and protein lysates were immunoblotted for CSE with FAK for loading control and quantified using ImageJ (). PT cells were transfected with either or scramble siRNA and then treated ± AA. () Effective reduction in CSE was verified with immunoblots and cleaved caspase-3 measured to detect apoptosis with α-tubulin for loading control. Immunoblots were quantified from 3 independent experiments using ImageJ (). The statistics for RNA-Seq are discussed in the Methods. For all other comparisons, the Student’s test comparing 2 sets of data was used (cells without oxidative stress or AA are shown as controls but not included in analyses) with * < 0.05.