FoxO3 expression is increased in PTs with β-catenin stabilized and is required for the protective effect of β-catenin in PTs in AAN. 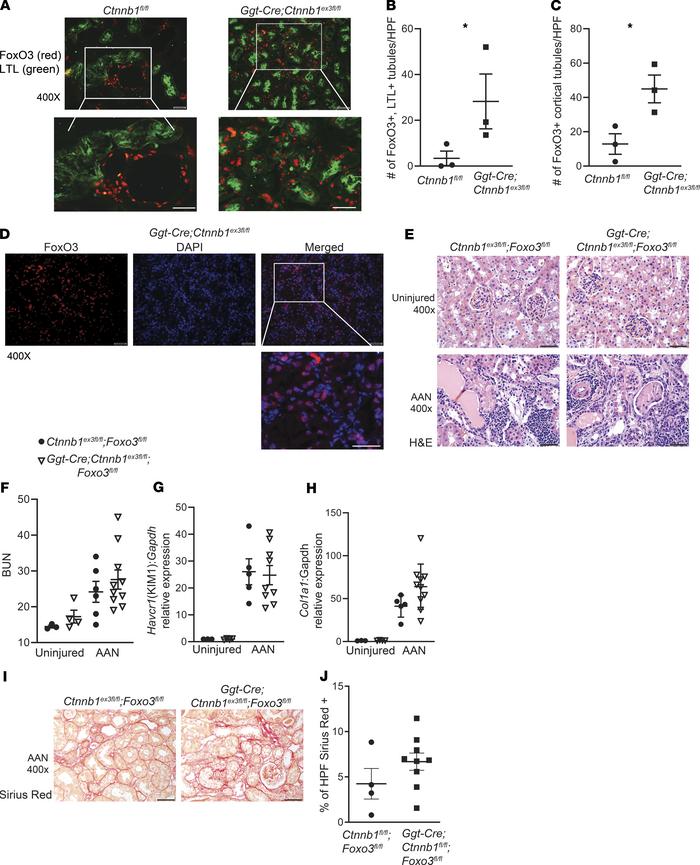 () FoxO3 (red) and LTL (green), a marker for PT cells, staining on frozen sections at 6 weeks after AAN with quantification of FoxO3+LTL+ tubule cells () and FoxO3+ cortical tubule cells () per high-power field, original magnification, ×400. () FoxO3 staining (red) merged with DAPI (blue) staining to show nuclear localization of FoxO3. () H&E sections of mice with β-catenin stabilized and FoxO3 deleted from the PT () and floxed control mice both uninjured and 6 weeks after AAN. () BUN of mice uninjured and 6 weeks after AAN is shown as well as KIM-1 () and collagen I () transcript levels by qPCR after normalization to ( and ). Picrosirius red staining done on the mice 6 weeks after AAN () with quantification by ImageJ (). Scale bar: 50 μm (black bar in original magnification ×400 and white bar in insets). In all graphs, Student’s test was used to compare 2 sets of data (uninjured mice shown as controls but not included in statistical analyses) with * < 0.05. One mouse from each genotype died before the study was completed.