Glaucoma surgeries, such as trabeculectomy, are performed to lower intraocular pressure to reduce risk of vision loss. These surgeries create a new passage in the eye that reroutes the aqueous humor outflow to the subconjunctival space, where the fluid is presumably absorbed by the conjunctival lymphatics. Here, we characterized the development and function of the ocular lymphatics using transgenic lymphatic reporter mice and rats. We found that the limbal and conjunctival lymphatic networks are progressively formed from a primary lymphatic vessel that grows from the nasal-side medial canthus region at birth. This primary lymphatic vessel immediately branches out, invades the limbus and conjunctiva, and bidirectionally encircles the cornea. As a result, the distribution of the ocular lymphatics is significantly polarized toward the nasal side, and the limbal lymphatics are directly connected to the conjunctival lymphatics. New lymphatic sprouts are produced mainly from the nasal-side limbal lymphatics, posing the nasal side of the eye as more responsive to fluid drainage and inflammatory stimuli. Consistent with this polarized distribution of the ocular lymphatics, a higher drainage efficiency was observed in the nasal side than the temporal side of the eye when injected with a fluorescent tracer. In contrast, blood vessels are evenly distributed at the anterior surface of the eyes. Also, we found that these distinct vascular distribution patterns were conserved in human eyes. Together, our study demonstrated that the ocular surface lymphatics are more densely present in the nasal side and uncovered the potential clinical benefits in selecting the nasal side as a glaucoma surgery site to improve fluid drainage.

Postnatal development of the ocular lymphatics originating from the nasal side in mice. 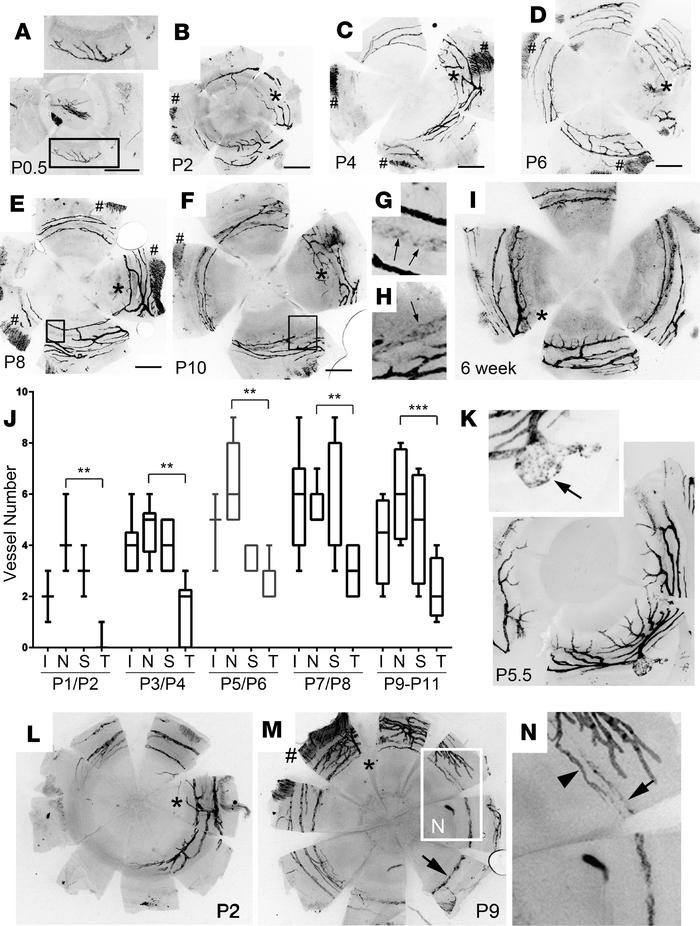 (–) Images showing the sequential lymphatic growth in the conjunctiva and limbus. The eyes from Prox1 reporter pups at P0.5, P2, P4, P6, P8, and P10, and 6-week-old adults, were enucleated, and cornea flat mounts were prepared. Asterisks point to the nasal side of the eye, and pound signs label the ocular muscles for the expression of Prox1 in ocular muscles (, ). Note that the ocular lymphatics originate from the nasal side and grow into the limbus (inner circle) and conjunctiva (outer circles). The formation of Schlemm’s canal (arrows) is evident by P8, and the boxed area in panels and are enlarged in panels and , respectively. Scale bars: 0.5 mm. Per time point, 3–7 pups (both sexes) were used for each experiment, and 1 representative image is shown. () A box plot showing the quantitative analyses of lymphatic vessels encircling the cornea in the inferior (I), nasal (N), superior (S), and temporal (T) quadrants of the eyes at P1/P2 ( = 3), P3/P4 ( = 6), P5/P6 ( = 7), P7/P8 ( = 7), and P9–P11 ( = 4). The number of lymphatic vessels seems to decrease in some regions in the older pups. However, this is due to sampling variation without a statistical significance. Statistical significance ( value) was calculated using unpaired test (2 tailed); ** < 0.01, and *** < 0.001. () The entire ocular lymphatic vascular tree seems to be rooted in a major lymphatic trunk in the eye of a Prox1 reporter pup (P5.5). In the enlarged inset, an arrow points to the disconnected lymphatic trunk. (–) Cornea flat mounts prepared from Prox1-EGFP reporter rats at P2 () and P9 () showing that the ocular lymphatics in rats also originate from the nasal side (asterisks). The boxed area is enlarged in panel to show the limbal lymphatic vessels (arrowhead) growing around the cornea edge and Schlemm’s canal (arrow) forming nearby. #, ocular muscle. Original magnification, ×4.6 (), ×2.7 (), ×2.5 (inset in ), and ×3.7 ().