Chronic beryllium disease (CBD) is a metal hypersensitivity/autoimmune disease in which damage-associated molecular patterns (DAMPs) promote a break in T cell tolerance and expansion of Be2+/self-peptide–reactive CD4+ T cells. In this study, we investigated the mechanism of cell death induced by beryllium particles in alveolar macrophages (AMs) and its impact on DAMP release. We found that phagocytosis of Be led to AM cell death independent of caspase, receptor-interacting protein kinases 1 and 3, or ROS activity. Before cell death, Be-exposed AMs secreted TNF-α that boosted intracellular stores of IL-1α followed by caspase-8–dependent fragmentation of DNA. IL-1α and nucleosomal DNA were subsequently released from AMs upon loss of plasma membrane integrity. In contrast, necrotic AMs released only unfragmented DNA and necroptotic AMs released only IL-1α. In mice exposed to Be, TNF-α promoted release of DAMPs and was required for the mobilization of immunogenic DCs, the expansion of Be-reactive CD4+ T cells, and pulmonary inflammation in a mouse model of CBD. Thus, early autocrine effects of particle-induced TNF-α on AMs led to a break in peripheral tolerance. This potentially novel mechanism may underlie the known relationship between fine particle inhalation, TNF-α, and loss of peripheral tolerance in T cell–mediated autoimmune disease and hypersensitivities.

Release of DAMPs from Be-exposed AMs compared with apoptotic, necroptotic, or necrotic AMs. 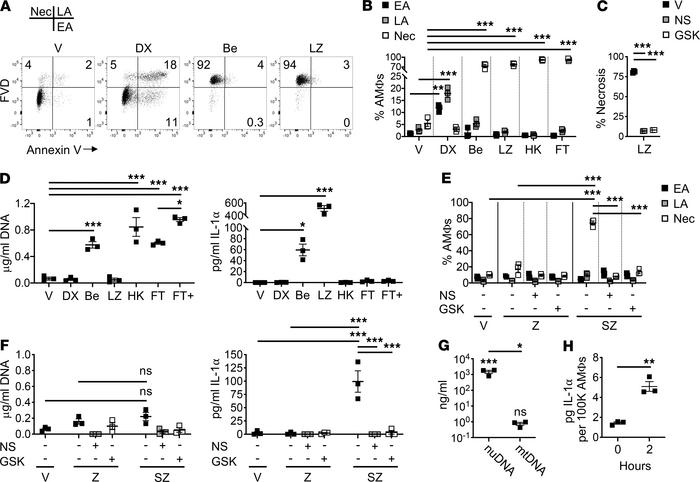 (–) AMs from B6 mice were cultured ± vehicle (V), 100 μM dexamethasone (DX), 50 μg/mL Be (Be), or 10 μg LPS + 40 μM Z-VAD-FMK (LZ) for 24 hours. () Gating of early apoptotic (EA), late apoptotic (LA), or necrotic (Nec) cells is shown. Numbers indicate the percentage of AMs in each gate for the sample shown. () The percentage of AMs that were EA, LA, or Nec is shown for each treatment group compared with heat-killed (HK) or freeze-thawed (FT) necrotic cells. () Percentage of AMs that were Nec following pretreatment with V, 10 μM necrostatin-1 (NS), or 0.5 μM GSK′872 (GSK) and stimulated with LZ are shown. () Concentrations of extracellular DNA and IL-1α in cell-free supernatants (SNs) are shown for each treatment group. (FT+ indicates protease inhibitors were present). ( and ) B6 AMs were pretreated with V (–), NS, or GSK (as described above) and stimulated ± V, 40 μM Z-VAD-FMK (Z) alone or together with 10 μM CUDC-427 Smac mimetic (SZ) for 24 hours. () The percentage of AMs that were EA, LA, or Nec are shown for each group. () Concentrations of DNA and IL-1α in SNs are shown. () Mean concentrations of nuclear DNA (nuDNA) and mitochondrial DNA (mtDNA) in bronchoalveolar lavage fluid (BALF) are shown. () Intracellular IL-1α was quantified in lysates of AMs from B6 mice exposed i.t. for either 0 or 2 hours to 50 μg Be. Data in and are representative data from 1 of 3 independent experiments, symbols on are triplicate values, and bars indicate means ± SD. Data in and – are combined from 3 independent experiments and performed in triplicate/experiment ( and –) or = 5 mice/experiment ( and ). Symbols on graphs are mean experimental values, and bars indicate the mean of means ± SEM. One-way ANOVA (–) or an unpaired 2-tailed test () was used to determine statistical differences between groups. Asterisks/ns symbols in with no bar were compared with nuDNA or mtDNA quantified from the BALF of PBS-treated control mice. Statistical values are indicated as ns, not significant; * < 0.05; ** < 0.01; *** < 0.001 for select comparisons.