Find articles by Kirch, B. in: JCI | PubMed | Google Scholar

RESULTS. Microarray analysis showed that immune-associated genes involved in T and B cell activation and receptor signaling were largely decreased by siponimod, which is consistent with the reduction of CD4+ T cells, CD8+ T cells, and B cells. Analysis done by flow cytometry showed that within the remaining lymphocyte subsets, there was a reduction in the frequencies of CD4 and CD8 naïve T cells and central memory cells, while T effector memory cells, anti-inflammatory Th2, and T regulatory (Treg) cells were enriched. Transitional Bregs (CD24hiCD38hi) and B1 cell subsets (CD43+CD27+) were enriched, shifting the balance in favor of regulatory B cells over memory B cells. The pro-regulatory shift driven by siponimod treatment included a higher proliferative potential of Tregs compared with non-Tregs, and upregulated expression of PD-1 on Tregs. Additionally, a positive correlation was found between regulatory T cells and regulatory B cells in siponimod treated participants.

CONCLUSION. The shift toward an anti-inflammatory and suppressive homeostatic immune system may contribute to the clinical efficacy of siponimod in SPMS. 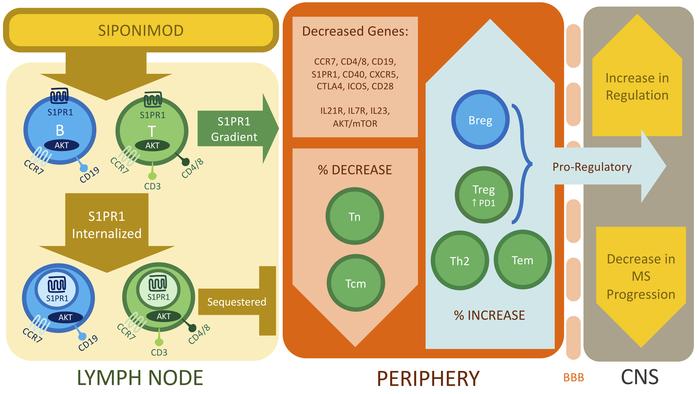