New strategies are needed to enhance the efficacy of anti–programmed cell death protein antibody (anti–PD-1 Ab) in cancer. Here, we report that inhibiting palmitoyl-protein thioesterase 1 (PPT1), a target of chloroquine derivatives like hydroxychloroquine (HCQ), enhances the antitumor efficacy of anti–PD-1 Ab in melanoma. The combination resulted in tumor growth impairment and improved survival in mouse models. Genetic suppression of core autophagy genes, but not Ppt1, in cancer cells reduced priming and cytotoxic capacity of primed T cells. Exposure of antigen-primed T cells to macrophage-conditioned medium derived from macrophages treated with PPT1 inhibitors enhanced melanoma-specific killing. Genetic or chemical Ppt1 inhibition resulted in M2 to M1 phenotype switching in macrophages. The combination was associated with a reduction in myeloid-derived suppressor cells in the tumor. Ppt1 inhibition by HCQ, or DC661, induced cyclic GMP-AMP synthase/stimulator of interferon genes/TANK binding kinase 1 pathway activation and the secretion of interferon-β in macrophages, the latter being a key component for augmented T cell–mediated cytotoxicity. Genetic Ppt1 inhibition produced similar findings. These data provide the rationale for this combination in melanoma clinical trials and further investigation in other cancers.

The effects of PPT1 inhibition are not recapitulated by , , and KD or KO, and HCQ does not impair CD8+ T cell–mediated killing. 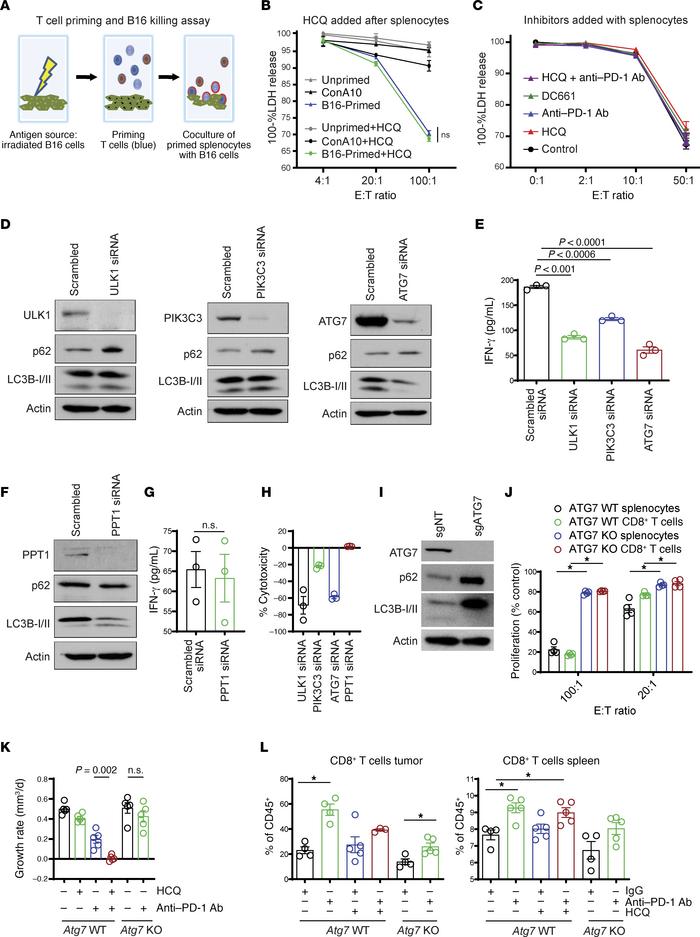 () Schematic of priming and coculture experiments to measure antigen-specific T cell killing in vitro. () One hundred percent lactate dehydrogenase (LDH) from the coculture of primed or unprimed splenocytes with live B16, in the presence or absence of HCQ (10 μM). Each experiment was performed in triplicates, and results were reproduced with 3 independent experiments. Concanavalin A was used as a nonspecific splenocyte priming agent. () One hundred percent LDH measurement in primed splenocytes cocultured with B16 with/without indicated treatments. () Immunoblots confirming the B16 -, -, and -KD status. () Dot plot representing ELISA performed for the measurement of splenocyte-secreted IFN-γ upon coculturing with B16 with -, -, and -KD conditions. Each experiment was performed in triplicates, and the results were reproduced by 3 independent experiments. () Immunoblot confirming the B16 -KD status. () Dot plot representing IFN-γ ELISA in -KD B16 coculture as above in for 3 independent experiments. () Measurement of percentage T cell–mediated cytotoxicity of B16 cells in , , , and condition. () Immunoblot confirming the B16 -KO status. () Irradiated B16-primed splenocytes or purified splenic CD8+ T cells were cocultured with B16 WT or B16 -KO cells, and the percentage proliferation was measured by performing 3 independent experiments. () B16 Cas9 control or B16 -KO cells (5 × 105) were injected into the flanks of C57BL6/J mice. After tumors reached a size of 50 mm3, mice were randomized to cohorts of = 5 mice each, and B16 Cas9 control tumors were treated with IgG control + vehicle, anti–PD-1 Ab (200 μg i.p. every other day) + vehicle, IgG + HCQ (60 mg/kg i.p. daily), or the combination. B16 -KO tumors were treated with either IgG control or anti–PD-1 Ab. The average growth rate ± SEM is shown. () Tumors and spleens were harvested from the experiment in , on day 8 of treatment. The percentage of CD8+ T cells in CD45+ cells in spleen and tumor are shown. All tests were 2 tailed ( and ). One-way ANOVA and Bonferroni’s adjustment (, , and ) or Dunnett’s procedure ( and ). E:T, effector/target; sgNT, single guide nontargeting.