Immune homeostasis in the gut-associated lymphoid tissues (GALT) is critical to prevent the development of inadvertent pathologies. B cells, as the producers of antibodies and cytokines, play an important role in maintaining the GALT homeostasis. However, the mechanism by which B cells specifically direct their responses toward non-self-antigens and become ignorant to self-antigens in the GALT is not known. Therefore, we developed what we believe to be a novel mouse model by expressing duck egg lysozyme (DEL) in gut epithelial cells in presence of HEL-reactive B cells. Notably, we observed a transient activation and rapid deletion of self-reactive B cells in Peyer’s patches and mesenteric lymph nodes upon self-antigen exposure. The survival of self-reactive B cells upon exposure to their self-antigen was partially rescued by blocking receptor editing but could be completely rescued by stronger survival signal, such as ectopic expression of BCL2. Importantly, rescuing the self-reactive B cells promoted production of autoantibodies and gut inflammation. Mechanistically, we identify a specific activation of TGF-β signaling in self-reactive B cells in the gut and a critical role of this pathway in maintaining peripheral tolerance. Collectively, our studies describe functional consequences and the fate of self-reactive B cells in GALT and provide potentially novel mechanistic insights governing self-tolerance of B cells in the gut. 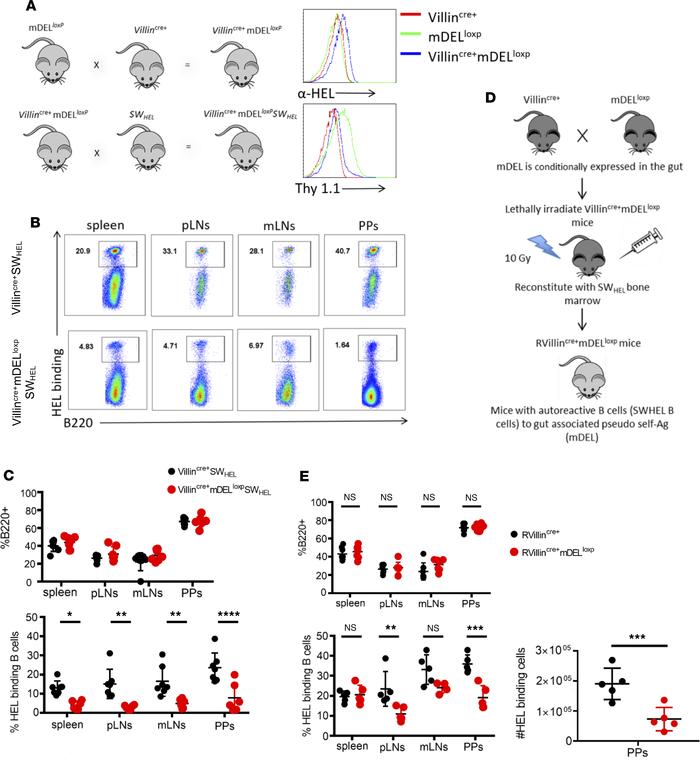