Mitochondrial quality control (MQC) is crucial for regulating CNS homeostasis, and its disruption has been implicated in the pathogenesis of some of the most common neurodegenerative diseases. In healthy tissues, the maintenance of MQC depends upon an exquisite balance between mitophagy (removal of damaged mitochondria by autophagy) and biogenesis (de novo synthesis of mitochondria). Here, we show that mitophagy is disrupted in diabetic retinopathy (DR) and decoupled from mitochondrial biogenesis during the progression of the disease. Diabetic retinas from human postmortem donors and experimental mice exhibit a net loss of mitochondrial contents during the early stages of the disease process. Using diabetic mitophagy-reporter mice (mitoQC-Ins2Akita) alongside pMitoTimer (a molecular clock to address mitochondrial age dynamics), we demonstrate that mitochondrial loss arose due to an inability of mitochondrial biogenesis to compensate for diabetes-exacerbated mitophagy. However, as diabetes duration increases, Pink1-dependent mitophagy deteriorates, leading to the build-up of mitochondria primed for degradation in DR. Impairment of mitophagy during prolonged diabetes is linked with the development of retinal senescence, a phenotype that blunted hyperglycemia-induced mitophagy in mitoQC primary Müller cells. Our findings suggest that normalizing mitochondrial turnover may preserve MQC and provide therapeutic options for the management of DR-associated complications.

The diabetic milieu dysregulates mitophagy in primary Müller and MIO-M1 cultures in vitro. 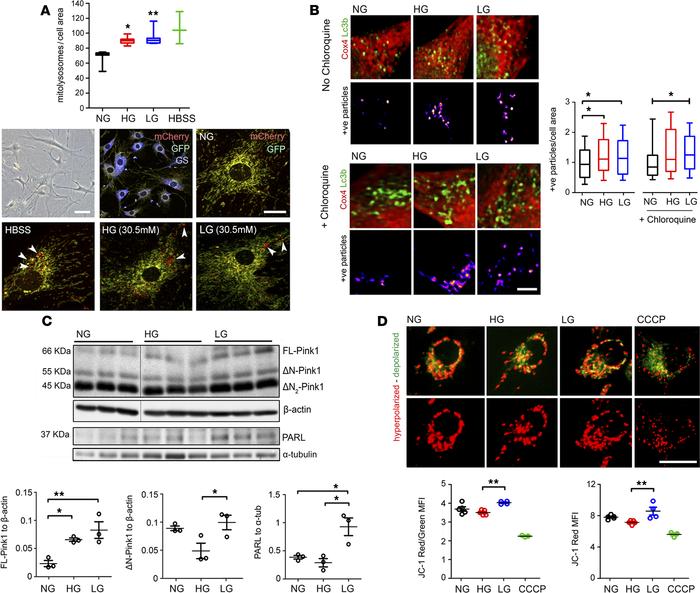