The synthesis of lipid and sterol species through de novo lipogenesis (DNL) is regulated by 2 functionally overlapping but distinct transcription factors: the SREBPs and carbohydrate response element–binding protein (ChREBP). ChREBP is considered to be the dominant regulator of DNL in adipose tissue (AT); however, the SREBPs are highly expressed and robustly regulated in adipocytes, suggesting that the model of AT DNL may be incomplete. Here, we describe what we believe to be a new mouse model of inducible, adipocyte-specific overexpression of the insulin-induced gene 1 (Insig1), a negative regulator of SREBP transcriptional activity. Contrary to convention, Insig1 overexpression did block AT lipogenic gene expression. However, this was immediately met with a compensatory mechanism triggered by redox activation of mTORC1 to restore SREBP1 DNL gene expression. Thus, we demonstrate that SREBP1 activity sustains adipocyte lipogenesis, a conclusion that has been elusive due to the constitutive nature of current mouse models.

Overexpression of Insig1 in adipocytes results in suppression of lipogenesis followed by compensation. 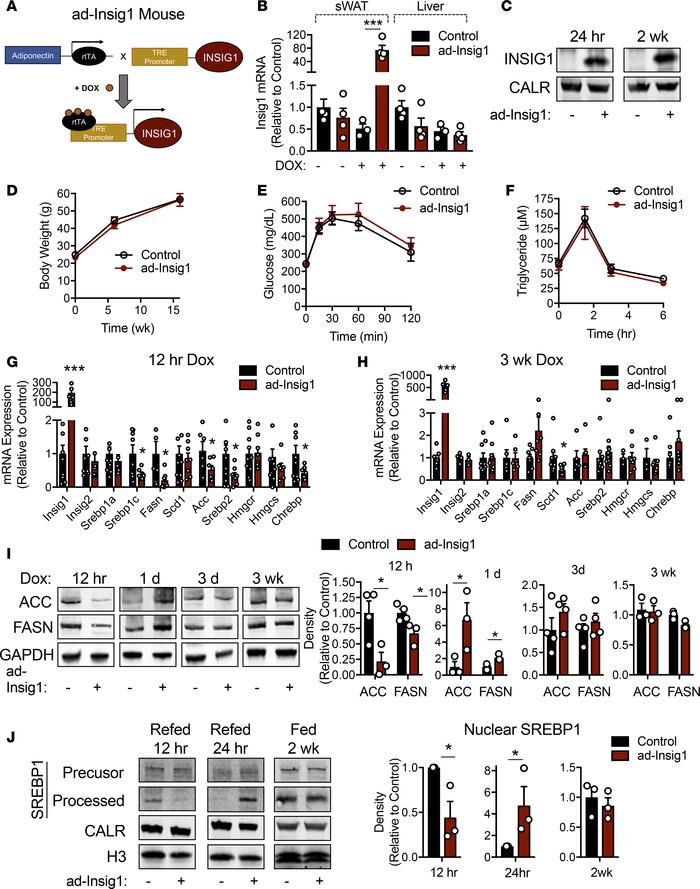 () Mouse model of inducible, adipocyte-specific overexpression of Insig1 (ad-Insig1). Doxycycline (dox) binds the reverse tetracycline transactivator (rtTA) expressed in adipocytes via the adiponectin promoter. The rtTA is thereby activated to bind the tetracycline response element (TRE) to drive Insig1 expression. () qPCR analysis of in sWAT or liver tissue from control and ad-Insig1 mice with or without dox treatment for 5 days ( = 3–4). () Insig1 protein expression in the ER membrane fraction of control or ad-Insig1 mouse sWAT treated with dox for 24 hours or 2 weeks. (–) Control or ad-Insig1 mice were provided a high-fat diet (HFD) containing dox for 16 weeks, during which () body weight was measured ( = 7). () An oral glucose tolerance test was conducted at 16 weeks on diet ( = 7), and () a triglyceride clearance test was performed at the 10-week time point on the same diet ( = 8). () Lipogenic gene expression in sWAT 12 hours after injection of 2 mg/kg dox ( = 8) or () 3 weeks of dox-containing chow diet ( = 5–8). () Representative Western blots and densitometry of ACC and FASN in sWAT at the indicated times of dox exposure ( = 3–4). Only the gel lanes that are cropped together can be compared. Blots for GAPDH were run separately from ACC and FASN, although consistent biological samples are presented. () Control and ad-Insig1 mice were fasted for 16 hours and refed dox-containing chow for 12 hours, 24 hours, or 2 weeks. sWAT tissue was separated into nuclear- and ER membrane–enriched fractions for processed and precursor SREBP1, respectively. Calreticulin (CALR) was used as a loading control from membrane fractions and histone 3 (H3) was used as the loading control for the nuclear fractions. Shown is a representative of = 3 Western blots and corresponding densitometry of nuclear-located SREBP1. All data are presented as mean ± SEM. * < 0.05, *** < 0.001 by 2-tailed Student’s test. In all cases, for a given condition, representative Western blot images are from the same sample, although the target proteins may have been probed on separate membranes to facilitate clear visualization. All densitometry was conducted on samples run on the same gel.