Muscle contractures are a prominent and disabling feature of many neuromuscular disorders, including the 2 most common forms of childhood neurologic dysfunction: neonatal brachial plexus injury (NBPI) and cerebral palsy. There are currently no treatment strategies to directly alter the contracture pathology, as the pathogenesis of these contractures is unknown. We previously showed in a mouse model of NBPI that contractures result from impaired longitudinal muscle growth. Current presumed explanations for growth impairment in contractures focus on the dysregulation of muscle stem cells, which differentiate and fuse to existing myofibers during growth, as this process has classically been thought to control muscle growth during the neonatal period. Here, we demonstrate in a mouse model of NBPI that denervation does not prevent myonuclear accretion and that reduction in myonuclear number has no effect on functional muscle length or contracture development, providing definitive evidence that altered myonuclear accretion is not a driver of neuromuscular contractures. In contrast, we observed elevated levels of protein degradation in NBPI muscle, and we demonstrate that contractures can be pharmacologically prevented with the proteasome inhibitor bortezomib. These studies provide what we believe is the first strategy to prevent neuromuscular contractures by correcting the underlying deficit in longitudinal muscle growth. 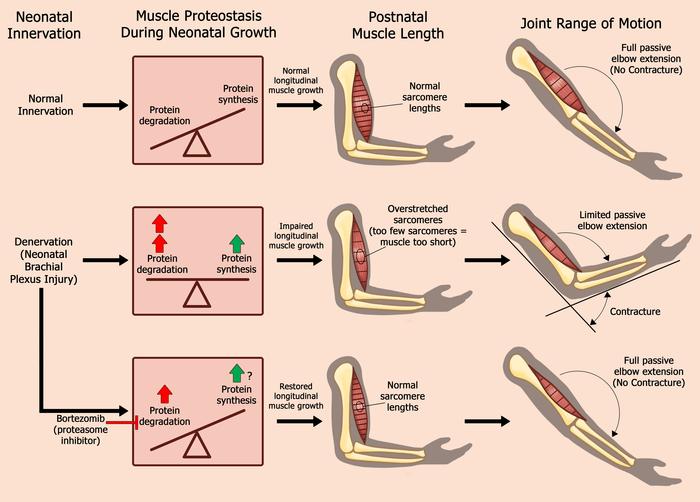