The common patatin-like phospholipase domain–containing protein 3 (PNPLA3) variant I148M predisposes to nonalcoholic liver disease but not its metabolic sequelae. We compared the handling of labeled polyunsaturated fatty acids (PUFAs) and saturated fatty acids (SFA) in vivo in humans and in cells harboring different PNPLA3 genotypes. In 148M homozygous individuals, triglycerides (TGs) in very low–density lipoproteins (VLDL) were depleted of PUFAs both under fasting and postprandial conditions compared with 148I homozygotes, and the PUFA/SFA ratio in VLDL-TGs was lower relative to the chylomicron precursor pool. In human PNPLA3-148M and PNPLA3-KO cells, PUFA but not SFA incorporation into TGs was increased at the expense of phosphatidylcholines, and under lipolytic conditions, PUFA-containing diacylglycerols (DAGs) accumulated compared with PNPLA3-148I cells. Polyunsaturated TGs were increased, while phosphatidylcholines (PCs) were decreased in the human liver in 148M homozygous individuals as compared with 148I homozygotes. We conclude that human PNPLA3-I148M is a loss-of-function allele that remodels liver TGs in a polyunsaturated direction by impairing hydrolysis/transacylation of PUFAs from DAGs to feed phosphatidylcholine synthesis.

Similar total concentrations of circulating lipids, glucose, and insulin in the PNPLA3148MM vs. PNPLA3148II groups. 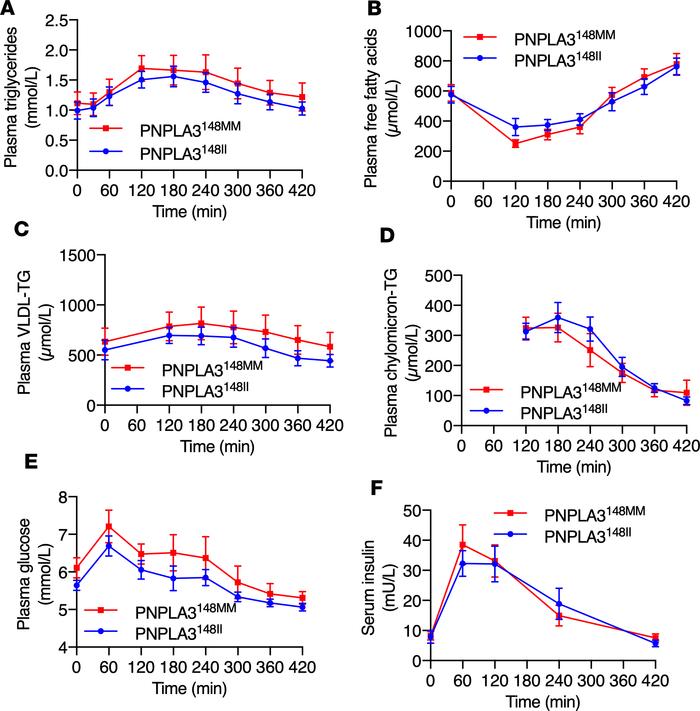