Gigaxonin (also known as KLHL16) is an E3 ligase adaptor protein that promotes the ubiquitination and degradation of intermediate filament (IF) proteins. Mutations in human gigaxonin cause the fatal neurodegenerative disease giant axonal neuropathy (GAN), in which IF proteins accumulate and aggregate in axons throughout the nervous system, impairing neuronal function and viability. Despite this pathophysiological significance, the upstream regulation and downstream effects of normal and aberrant gigaxonin function remain incompletely understood. Here, we report that gigaxonin is modified by O-linked β-N-acetylglucosamine (O-GlcNAc), a prevalent form of intracellular glycosylation, in a nutrient- and growth factor–dependent manner. MS analyses of human gigaxonin revealed 9 candidate sites of O-GlcNAcylation, 2 of which — serine 272 and threonine 277 — are required for its ability to mediate IF turnover in gigaxonin-deficient human cell models that we created. Taken together, the results suggest that nutrient-responsive gigaxonin O-GlcNAcylation forms a regulatory link between metabolism and IF proteostasis. Our work may have significant implications for understanding the nongenetic modifiers of GAN phenotypes and for the optimization of gene therapy for this disease. 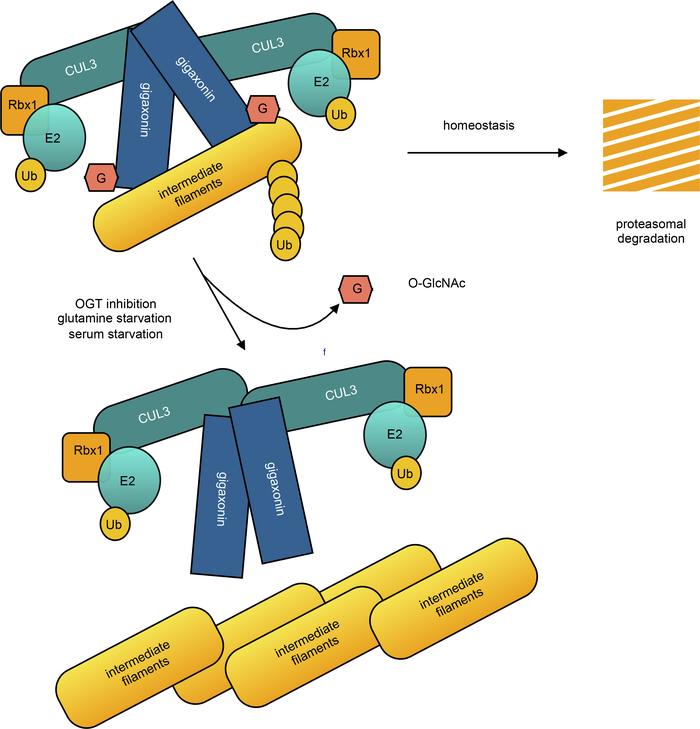