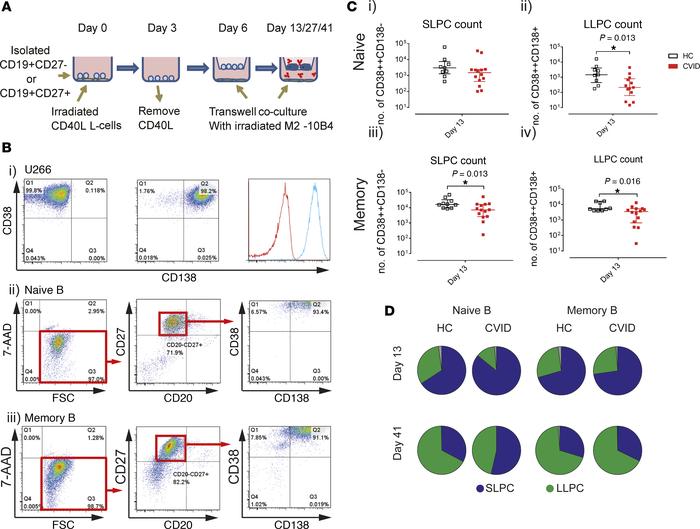 Naive (CD27–) and memory (CD27+) B cells were enriched by magnetic bead isolation and terminally differentiated into plasma cells using a 3-step culture system. B cells were initially activated by CD40L-expressing L cells supplemented with IL-2, IL-21, and anti–IgA/M/G F(ab′)2 and then transferred to a Transwell system supported by murine bone marrow fibroblasts (M2-10B4) on day 6. The wells were harvested on days 13 and 41 for flow cytometric analysis. Short-lived plasma cells (SLPCs: 7-AAD–CD20–CD27+CD38+CD138–) and long-lived plasma cells (LLPCs: 7-AAD–CD20–CD27+CD38+CD138+) were enumerated using counting beads. () Schematic diagram of LLPC culture. () The gating strategy is shown. A U266 myeloma cell line was used to optimize CD38 and CD138 gating. Events within the upper-left quadrant of the far-right gate were considered SLPCs, whereas events within the upper-right quadrant were considered LLPCs. Examples of both naive and memory B cell differentiation of a healthy donor at day 13. () SLPC and LLPC counts generated from naive and memory cultures at day 13 of healthy donors ( = 10) and patients with CVID ( = 14). Median and interquartile range are represented by the height and error bar, respectively. Mann-Whitney test was used. Statistical significance is indicated as * < 0.05. () The proportions of SLPCs (blue) and LLPCs (green) within naive and memory cultures at day 13 and day 41 are shown in a series of pie charts.