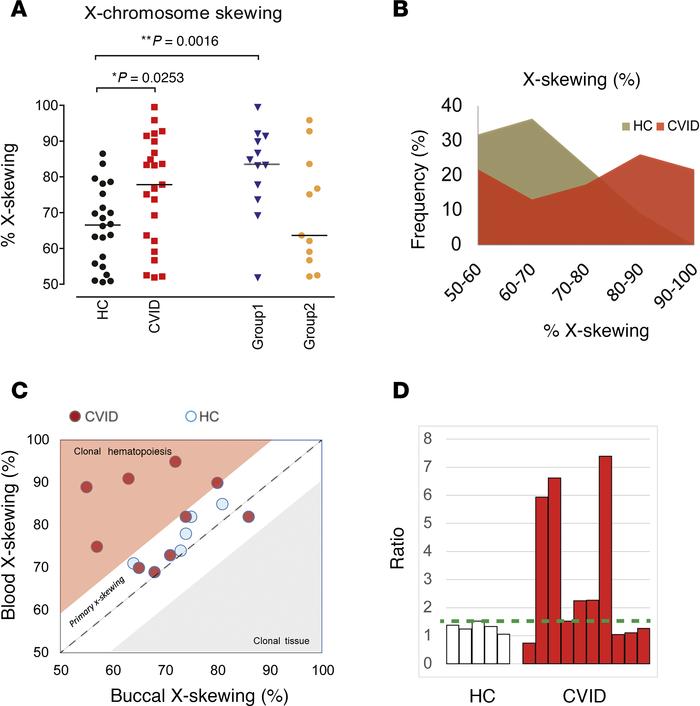 X chromosome skewing of whole-blood DNA was determined using the HUMARA assay. X-skewing was corrected by the matching undigested control. () Results of female healthy controls (HCs) ( = 22), CVID patients ( = 23), group 1 patients ( = 12), and group 2 patients ( = 11) are shown. The horizontal lines represent the median, and statistical differences are highlighted (Mann-Whitney test). () The frequencies of X-skewing of HCs and patients with CVID are shown, demonstrating a right shift within the CVID cohort. Comparison of buccal and blood X-skewing suggested acquired clonal hematopoiesis in patients with CVID but primary X-skewing in healthy donors. () X-skewing by the HUMARA assay was compared between matching blood and buccal samples of healthy donors ( = 5, light blue circles) and patients with CVID ( = 10, red circles) who had previously demonstrated high levels of X-skewing in their whole-blood analysis. The dotted blue line represents a theoretical 1:1 ratio. Dots in the white zone are considered to have primary X-skewing, while dots in the pink zone are considered to have clonal hematopoiesis. () The X-skewing ratios in the blood were adjusted to the expected ratios observed in the buccal sample and depicted as a bar chart (HCs, white; CVID, red). The highest HC blood/buccal ratio (1.6) is marked by the green dotted line.