Hereditary renal cystic diseases are characterized by defects in primary cilia of renal tubular epithelial cells and abnormality of tubular epithelium, which ultimately result in the development of renal cysts. However, the mechanism leading from abnormality of the tubular epithelium to cystogenesis is not well understood. In this report, we demonstrate a critical role for Robo2 in regulating epithelial development, including ciliogenesis, polarization, and differentiation. We found that Robo2 deficiency results in cystic kidneys, and the cyst cells showed defective cilia and polarity defects in tubular epithelium. The cyst cells, less than terminally differentiated, continue to proliferate. We further established that Robo2 works with p53 as well as polarity and ciliary proteins (Par3, PKCς, ZO-2, and Claudin-2) to regulate these processes. Robo2 binds to Baiap2 (also known as IRSp53) through the IRSp53/MIM homology domain in renal epithelial cells. This binding allows Robo2 to phosphorylate MDM2 at Ser166 via Baiap2 and maintain p53 homeostasis. Disruption of the Robo2-Baiap2 complex causes MDM2 to be subjected to dephosphorylation, leading to a high level of active p53, and initiated p53-mediated cellular senescence via p21 and decreased the expression of ZO-1, ZO-2, PKCς, Par3, and Claudin-2 proteins, resulting in defects in epithelial development, including ciliogenesis, polarization, and differentiation. Importantly, double knockout of Robo2 and p53 rescued all the epithelial defects in kidneys compared with those in Robo2-knockout kidneys. Taken together, the present results demonstrate that Robo2 deficiency causes renal cystic disease, which is largely dependent on defective Robo2-Baiap2 integrated signaling in kidneys.

Robo2 is required for progenitor cells to differentiate into ciliated and polarized epithelium. 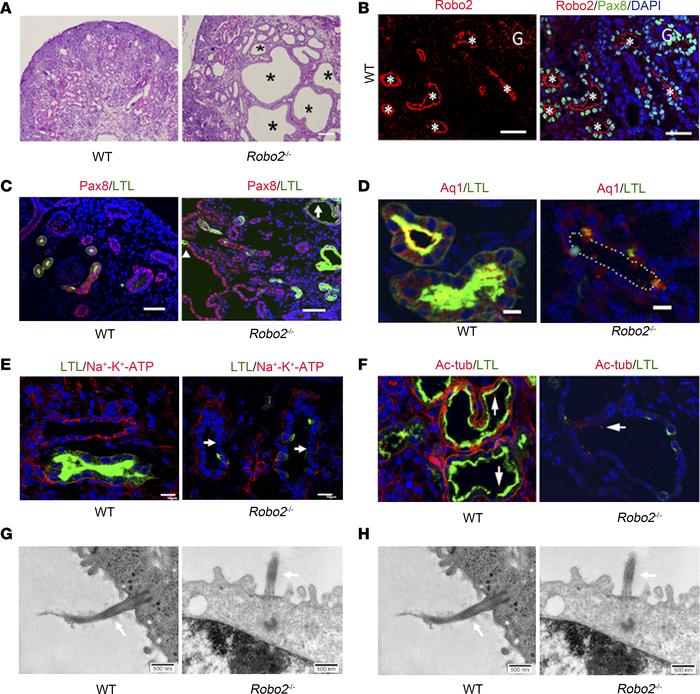