Targeting self- and neoepitopes with a modular self-adjuvanting cancer vaccine

Targeting self- and neoepitopes with a modular self-adjuvanting cancer vaccine

Induction of a potent CD4 and CD8 T cell response against tumor-specific and tumor-associated antigens is critical for eliminating tumor cells. Recent vaccination strategies have been hampered by an inefficacious and low-amplitude immune response. In this article, we describe a self-adjuvanted chimeric protein vaccine platform to address these challenges, characterized by a multidomain construction incorporating (a) a cell-penetrating peptide allowing internalization of several multiantigenic MHC-restricted peptides within (b) the multiantigenic domain and (c) a TLR2/4 agonist domain. Functionality of the resulting chimeric protein is based on the combined effect of the above-mentioned 3 different domains for simultaneous activation of antigen-presenting cells and antigen cross-presentation, leading to an efficacious multiantigenic and multiallelic cellular immune response. Helper and cytotoxic T cell responses were observed against model-, neo-, and self-antigens and were highly potent in several murine tumor models. The safety and the immunogenicity of a human vaccine candidate designed for colorectal cancer treatment was demonstrated in a nonhuman primate model. This therapeutic vaccine approach, which we believe to be newly engineered, is promising for the treatment of poorly infiltrated tumors that do not respond to currently marketed immunotherapies.

Optimization of the vaccine construct based on self-adjuvanticity. 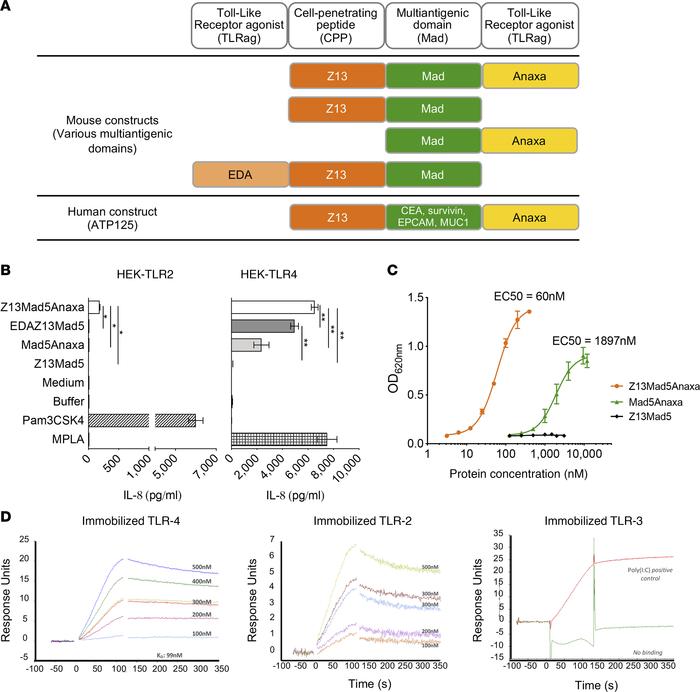 () The KISIMA vaccination platform consists of 3 modules: the cell-penetrating peptide, the multiantigenic domain, and the TLR agonist. () HEK-Blue hTLR2 cells and HEK-Blue hTLR4 cells were incubated with 1 μM of vaccine construct or adjuvant (MPLA or Pam3Cys) medium or buffer. After 24 hours, supernatants were harvested and IL-8 measured by ELISA. One experiment shown is representative of 2 (mean ± SEM). * < 0.05; ** < 0.01 (unpaired test). () THP1-XBlue-MD2-CD14 cells were incubated with various concentrations of vaccine constructs, medium, or buffer. After 18 hours, supernatants were recovered, and SEAP activity was measured by QUANTI-Blue assay (InvivoGen). The EC50 of the Z13Mad5Anaxa and Mad5Anaxa was calculated from the obtained dose-response curves using Prism software. () The binding of ATP125 to TLR4, TLR2, and TLR3 was measured by surface plasmon resonance analysis for different concentrations of ATP125: 100, 200, 300 (in duplicate), 400, and 500 nM and sensorgrams were obtained. All curves indicate the response after subtraction of nonspecific binding of molecules to a control channel.