Wilms’ tumor is the most common type of childhood kidney cancer. To improve risk stratification and identify novel therapeutic targets for patients with Wilms’ tumor, we used high-resolution mass spectrometry proteomics to identify urine tumor markers associated with Wilms’ tumor relapse. We determined the urine proteomes at diagnosis of 49 patients with Wilms’ tumor, non–Wilms’ tumor renal tumors, and age-matched controls, leading to the quantitation of 6520 urine proteins. Supervised analysis revealed specific urine markers of renal rhabdoid tumors, kidney clear cell sarcomas, renal cell carcinomas as well as those detected in patients with cured and relapsed Wilms’ tumor. In particular, urine prohibitin was significantly elevated at diagnosis in patients with relapsed as compared with cured Wilms’ tumor. In a validation cohort of 139 patients, a specific urine prohibitin ELISA demonstrated that prohibitin concentrations greater than 998 ng/mL at diagnosis were significantly associated with ultimate Wilms’ tumor relapse. Immunohistochemical analysis revealed that prohibitin was highly expressed in primary Wilms’ tumor specimens and associated with disease stage. Using functional genetic experiments, we found that prohibitin was required for the growth and survival of Wilms’ tumor cells. Overexpression of prohibitin was sufficient to block intrinsic mitochondrial apoptosis and to cause resistance to diverse chemotherapy drugs, at least in part by dysregulating factors that control apoptotic cytochrome c release from mitochondrial cristae. Thus, urine prohibitin may improve therapy stratification, noninvasive monitoring of treatment response, and early disease detection. In addition, therapeutic targeting of chemotherapy resistance induced by prohibitin dysregulation may offer improved therapies for patients with Wilms’ and other relapsed or refractory tumors.

PHB overexpression leads to failure to release cytochrome c from cristae junctions despite the presence of a MOMP complex. 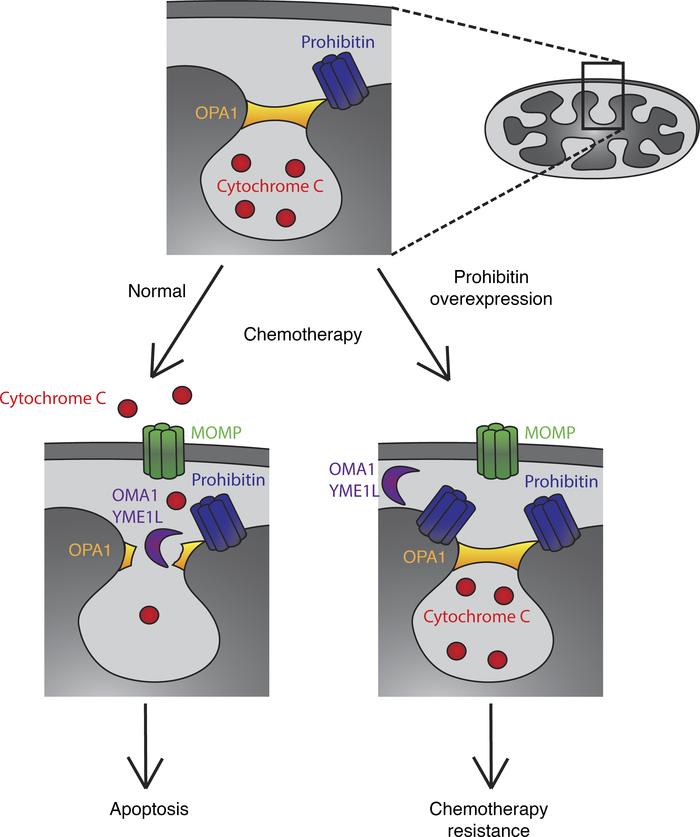 Prohibitin (blue) forms a complex along the mitochondrial inner membrane that interacts with several key regulators of apoptosis, including the OPA1 complex (orange) located at cristae junctional openings. The majority of cytochrome c (red) is sequestered within these cristae and in response to apoptotic stimuli such as chemotherapy, the MOMP complex consisting of BAX and BAK is inserted into the mitochondrial outer membrane. Upon proteolysis of the OPA1 complex, generally via OMA1 or other intermembrane proteases (purple), cytochrome c is released into the cytosol where it results in the apoptotic cascade. Our model proposes that due to the overexpression of PHB, in response to apoptotic stimuli, intermembrane proteases are no longer able to access the OPA1 complex, thereby resulting in resistance to chemotherapy despite the presence of a MOMP pore in the outer mitochondrial membrane, ultimately resulting in failure to undergo apoptosis and chemotherapy resistance.