miR-511-3p, encoded by CD206/Mrc1, was demonstrated to reduce allergic inflammation and promote alternative (M2) macrophage polarization. Here, we sought to elucidate the fundamental mechanism by which miR-511-3p attenuates allergic inflammation and promotes macrophage polarization. Compared with WT mice, the allergen-challenged Mrc1–/– mice showed increased airway hyperresponsiveness (AHR) and inflammation. However, this increased AHR and inflammation were significantly attenuated when these mice were pretransduced with adeno-associated virus–miR-511-3p (AAV–miR-511-3p). Gene expression profiling of macrophages identified Ccl2 as one of the major genes that was highly expressed in M2 macrophages but antagonized by miR-511-3p. The interaction between miR-511-3p and Ccl2 was confirmed by in silico analysis and mRNA-miR pulldown assay. Further evidence for the inhibition of Ccl2 by miR-511-3p was given by reduced levels of Ccl2 in supernatants of miR-511-3p–transduced macrophages and in bronchoalveolar lavage fluids of AAV–miR-511-3p–infected Mrc1–/– mice. Mechanistically, we demonstrated that Ccl2 promotes M1 macrophage polarization by activating RhoA signaling through Ccr2. The interaction between Ccr2 and RhoA was also supported by coimmunoprecipitation assay. Importantly, inhibition of RhoA signaling suppressed cockroach allergen–induced AHR and lung inflammation. These findings suggest a potentially novel mechanism by which miR-511-3p regulates allergic inflammation and macrophage polarization by targeting Ccl2 and its downstream Ccr2/RhoA axis. 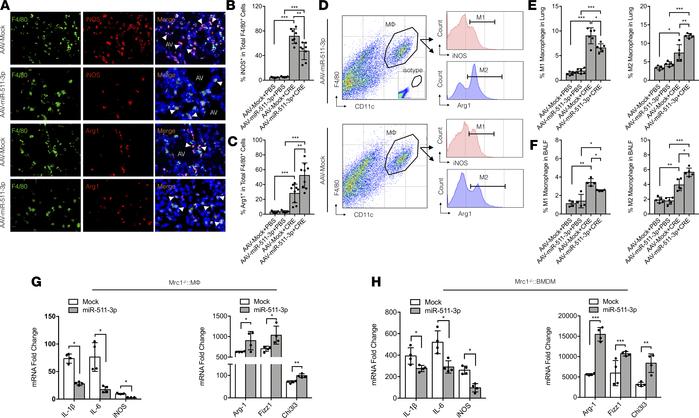