Humoral immunity is important in limiting clinical disease in malaria, yet the longitudinal B cell response to infection remains unclear. We performed a 1-year prospective study in patients treated for acute Plasmodium falciparum malaria for the first time or with previous exposure to the disease. Using an unbiased exploratory approach with mass cytometry, followed by targeted flow cytometry, we found that approximately 80% of mature B cells that proliferated in response to acute infection expressed CD11c. Only approximately 40% of CD11c+ B cells displayed an atypical B cell phenotype, with the remaining cells primarily made up of activated and resting memory B cells. The CD11c+ B cells expanded rapidly following infection, with previous exposure to malaria resulting in a significantly larger increase compared with individuals with primary infection. This was attributed to an expansion of switched CD11c+ B cells that was absent in primary infected individuals. The rate of contraction of the CD11c+ B cell compartment was independent of previous exposure to malaria and displayed a slow decay, with a half-life of approximately 300 days. Collectively, these results identify CD11c as a marker of B cells responding to malaria and further highlight differences in primary and secondary B cell responses during infection. 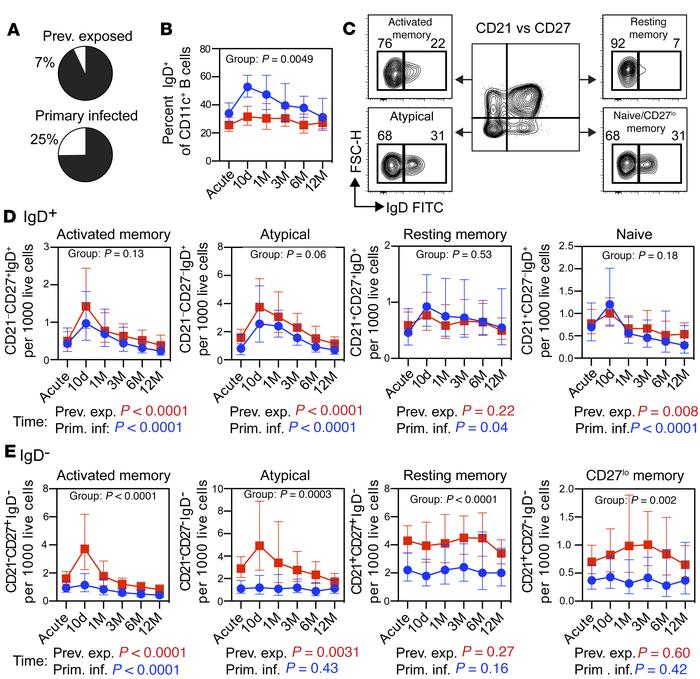 () Frequency of IgD+CD11c+ B cells in primary infected ( = 2) and previously exposed ( = 2) individuals, as determined by mass cytometry. () Frequency of IgD+ cells among CD11c+ B cells, as determined by flow cytometry. () Schematic gating strategy for assessing IgD expression in CD11c+ B cell subsets separated by expression of CD21 and CD27. (, , and ) Cell numbers per thousand live lymphocyte singlets for () IgD+ or () IgD− CD11c+ B cell subsets. Statistical differences between groups (, , and ) and in the B cell subset dynamics over time ( and ) were assessed using a linear mixed-effects model and are indicated within and underneath the graphs by group and time, respectively. The same color scheme and donor numbers () are used throughout the figure (, , and ), with primary infected individuals indicated by blue circles/text ( = 16) and previously exposed individuals by red boxes/text ( = 33). Lines indicate geometric mean ± 95% CI.