Biased agonism is a paradigm that may explain the selective activation of a signaling pathway via a GPCR that activates multiple signals. The autoantibody-induced inactivation of the calcium-sensing receptor (CaSR) causes acquired hypocalciuric hypercalcemia (AHH). Here, we describe an instructive case of AHH in which severe hypercalcemia was accompanied by an increased CaSR antibody titer. These autoantibodies operated as biased allosteric modulators of CaSR by targeting its Venus flytrap domain near the Ca2+-binding site. A positive allosteric modulator of CaSR, cinacalcet, which targets its transmembrane domain, overcame this autoantibody effect and successfully corrected the hypercalcemia in this patient. Hence, this is the first study to our knowledge that identifies the interaction site of a disease-causing GPCR autoantibody working as its biased allosteric modulator and demonstrates that cinacalcet can correct the AHH autoantibody effects both in vitro and in our AHH patient. Our observations provide potentially new insights into how biased agonism works and how to design a biased allosteric modulator of a GPCR. Our observations also indicate that the diagnosis of AHH is important because the severity of hypercalcemia may become fatal if the autoantibody titer increases. Calcimimetics may serve as good treatment options for some patients with severe AHH.

Temporal profile of serum Ca levels in our AHH patient and identification of CaSR autoantibody. 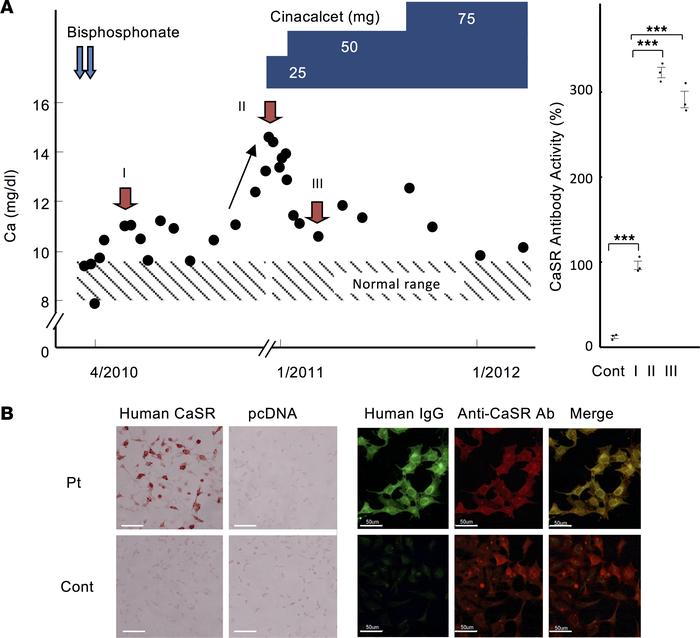