Drug refractory epilepsy (RE) is a chronic neurological disease with varied etiology that represents a group of patients whose seizures do not respond to antiepileptic drugs. The immune system may have a role in seizure and epilepsy development, but the specific mechanisms of inflammation that lead to epileptogenesis and contribute to RE are unknown. Here, we used mass cytometry to comprehensively study the immune system of pediatric patients with RE and compared their immune profile and function with patients with age-matched autoimmune encephalitis (AIE) and healthy controls. Patients with RE and AIE displayed similar immune profiles overall, with changes in CD4+ and CD8+ T cell subsets and an unbalance toward proinflammatory IL-17 production. In addition, patients with RE uniquely showed an altered balance in NK cell subsets. A systems-level intercellular network analysis identified rewiring of the immune system, leading to loss of inhibitory/regulatory intercellular connections and emergence of proinflammatory pathogenic functions in neuroinflammatory immune cell networks in patients with AIE and RE. These data underscore the contribution of systemic inflammation to the pathogenesis of seizures and epileptogenesis and have direct translational implications in advancing diagnostics and therapeutics design. 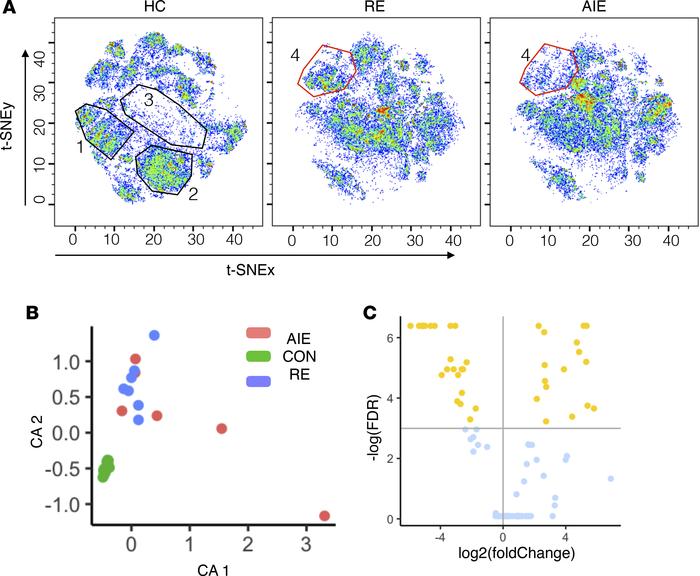 () Cell subset distribution was visualized on a t-SNE map. Separate t-SNE maps for healthy controls (HC), refractory epilepsy (RE), and autoimmune encephalitis (AIE) groups were plotted. The and axes correspond to the t-SNEx and t-SNEy coordinates, respectively. Each cell is plotted as a dot, and the color indicates the density of cells. Blue dots and empty spaces indicate low cell densities, while green and red dots indicate high cell densities. The t-SNE plot was visualized in pseudo-color using FlowJo software. () Correspondence analysis (CA) to summarize the distribution of immune cell subsets (clustered using k-means clustering algorithms) as 2 principal components, CA1 and CA2, for each individual from the HC, RE, and AIE groups. () Volcano plot shows the result of statistical comparison between HC and NI group. The axis shows the fold change (log2 scale), and the axis shows the FDR values (–log[FDR]). Nodes above the horizontal line (yellow dots) indicate significantly altered nodes with a 10% FDR cutoff. Nodes left of the vertical line are reduced in frequency, while nodes on the right are increased in frequency.