Left ventricular noncompaction (LVNC) is one of the most common forms of genetic cardiomyopathy characterized by excessive trabeculation and impaired myocardial compaction during fetal development. Patients with LVNC are at higher risk of developing left/right ventricular failure or both. Although the key regulators for cardiac chamber development are well studied, the role of semaphorin (Sema)/plexin signaling in this process remains poorly understood. In this article, we demonstrate that genetic deletion of Plxnd1, a class-3 Sema receptor in endothelial cells, leads to severe cardiac chamber defects. They were characterized by excessive trabeculation and noncompaction similar to patients with LVNC. Loss of Plxnd1 results in decreased expression of extracellular matrix proteolytic genes, leading to excessive deposition of cardiac jelly. We demonstrate that Plxnd1 deficiency is associated with an increase in Notch1 expression and its downstream target genes. In addition, inhibition of the Notch signaling pathway partially rescues the excessive trabeculation and noncompaction phenotype present in Plxnd1 mutants. Furthermore, we demonstrate that Semaphorin 3E (Sema3E), one of PlexinD1’s known ligands, is expressed in the developing heart and is required for myocardial compaction. Collectively, our study uncovers what we believe to be a previously undescribed role of the Sema3E/PlexinD1 signaling pathway in myocardial trabeculation and the compaction process. 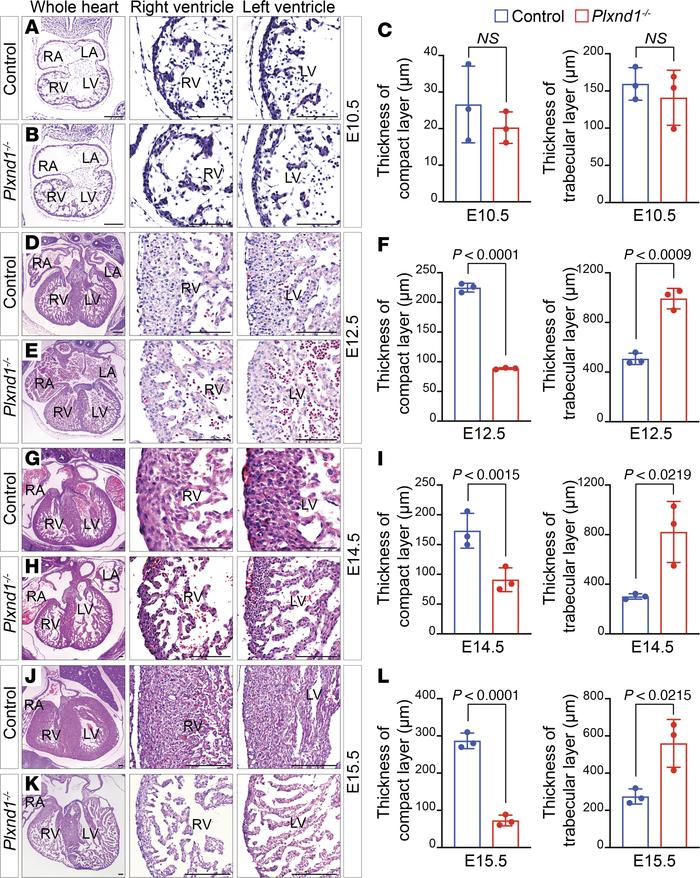