Many cytokines and chemokines that are important for hematopoiesis activate the PI3K signaling pathway. Because this pathway is frequently mutated and activated in cancer, PI3K inhibitors have been developed for the treatment of several malignancies and are now being tested in the clinic in combination with chemotherapy. However, the role of PI3K in adult hematopoietic stem cells (HSCs), particularly during hematopoietic stress, is still unclear. We previously showed that the individual PI3K catalytic isoforms p110α and p110β have dispensable roles in HSC function, suggesting redundancy between PI3K isoforms in HSCs. We now demonstrate that simultaneous deletion of p110α and p110δ in double-knockout (DKO) HSCs uncovers their redundant requirement in HSC cycling after 5-fluorouracil (5-FU) chemotherapy administration. In contrast, DKO HSCs were still able to exit quiescence in response to other stress stimuli, such as LPS. We found that DKO HSCs and progenitors had impaired sensing of inflammatory signals ex vivo, and that levels of IL-1β and MIG were higher in the bone marrow (BM) after LPS than after 5-FU administration. Furthermore, exogenous in vivo administration of IL-1β could induce cell cycle entry of DKO HSCs. Our findings have clinical implications for the use of PI3K inhibitors in combination with chemotherapy.

Optimal signal transduction of IL-1β or TNF-α in HSPCs requires p110α and p110δ. 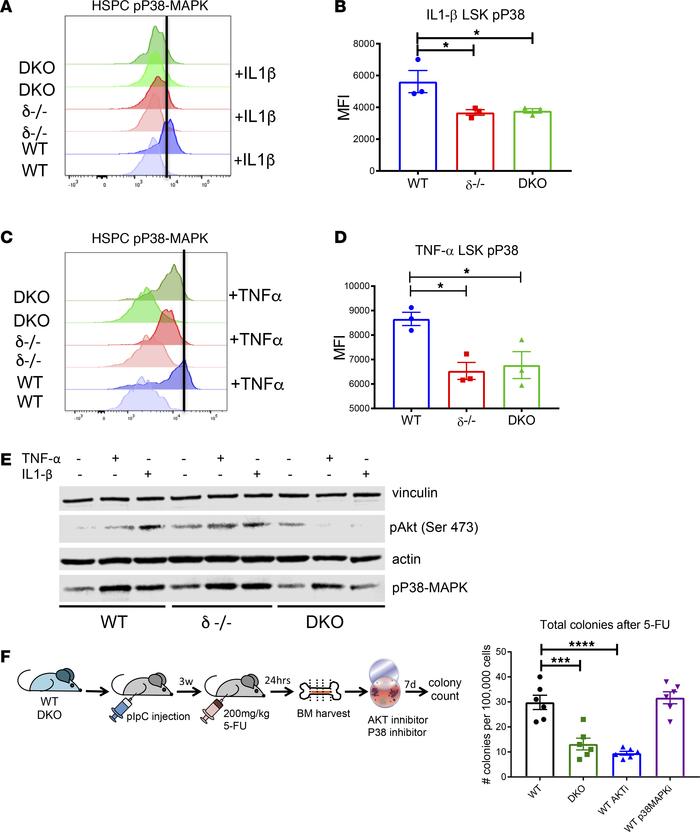