Postinfluenza bacterial superinfections cause increased morbidity and mortality compared with singular infection with influenza during both pandemics and seasonal epidemics. Vaccines and current treatments provide limited benefit, a rationale to conduct studies utilizing alternative therapies. FY1 and an optimized version, MEDI8852, anti-influenza HA mAbs, have been shown to neutralize influenza virus during singular influenza infection. MEDI4893*, an anti–Staphylococcus aureus α-toxin mAb, has been shown to improve survival when administered prophylactically prior to S. aureus pneumonia. Our objective was to determine if mAbs can improve survival during postinfluenza bacterial pneumonia. We administered FY1 in a murine model of postinfluenza methicillin-resistant S. aureus (MRSA) pneumonia and observed improved survival rates when given early during the course of influenza infection. Our findings indicate decreased lung injury and increased uptake and binding of bacteria by macrophages in the mice that received FY1 earlier in the course of influenza infection, corresponding to decreased bacterial burden. We also observed improved survival when mice were treated with a combination of FY1 and MEDI4893* late during the course of postinfluenza MRSA pneumonia. In conclusion, both FY1 and MEDI4893* prolong survival when used in a murine model of postinfluenza MRSA pneumonia, suggesting pathogen-specific mAbs as a possible therapeutic in the context of bacterial superinfection. 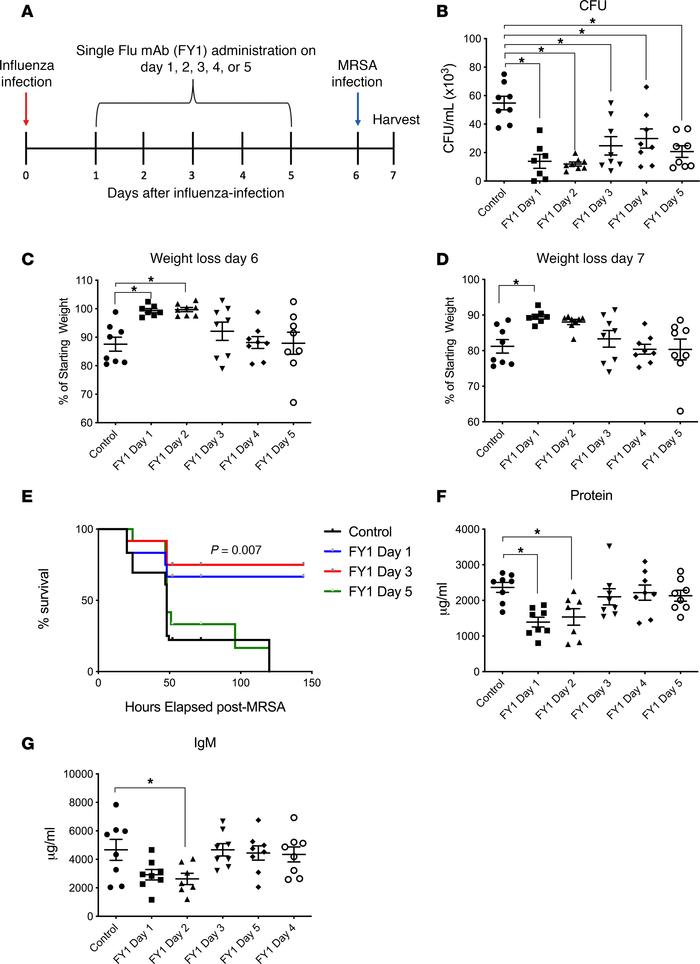