BACKGROUND. The West African Ebola virus epidemic from 2014–2016 highlighted the lack of knowledge about the pathogenicity of the virus and the factors responsible for outcome. A performant and rapid diagnosis is of crucial importance, as is overcoming the difficulty of providing high-quality patient management during such an extensive outbreak. Here, we propose to study the role of the immune mediators during Ebola virus disease and to define some molecules of importance in the outcome. METHODS. Plasma from Guinean patients sampled during the outbreak were analyzed using RT-qPCR, magnetic bead assay, ELISA, and high-quality statistical analyses. We also performed a transcriptomic analysis in leukocytes samples. Therefore, we deeply characterized the immune responses involved in Ebola virus disease. RESULTS. We evaluated the immune patterns depending on the outcome of the disease. Survivors presented an efficient and well-balanced immune response, whereas fatalities were characterized by an intense inflammatory response, overexpression of multiple cytokines, and a “chemokine storm.” The plasma concentration of most of the parameters tested increased until death. Statistical analyses also allowed us to define a panel of markers highly predictive of outcome. CONCLUSION. The immune response observed in fatalities was highly similar to that characterizing septic shock syndrome. Our results suggest that immune responses can play a major pathogenic role during severe Ebola virus infection and argue in favor of therapeutic approaches that act on both viral replication and the induction of shock syndrome. FUNDING. French Ministry of Foreign Affairs, the Agence Française de Développement, and the Institut Pasteur.

Presentation of the cohort. 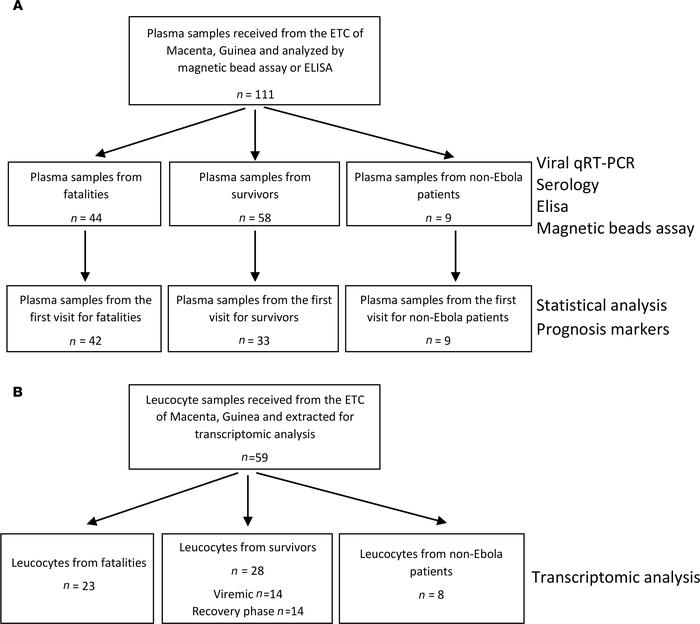 () Plasma samples received from the Ebola treatment center of Macenta, Guinea, were assayed, and statistical analysis was performed using only the first sample from each patient. () RNA from leucocyte samples was extracted and used for microarrays assay.