Recovery from acute lung injury (ALI) is an active process. Foxp3+ Tregs contribute to recovery from ALI through modulating immune responses and enhancing alveolar epithelial proliferation and tissue repair. The current study investigates Treg transcriptional profiles during resolution of ALI in mice. Tregs from either lung or splenic tissue were isolated from uninjured mice or mice recovering from ALI and then examined for differential gene expression between these conditions. In mice with ALI, Tregs isolated from the lungs had hundreds of differentially expressed transcripts compared with those from the spleen, indicating that organ specificity and microenvironment are critical in Treg function. These regulated transcripts suggest which intracellular signaling pathways modulate Treg behavior. Interestingly, several transcripts having no prior recognized function in Tregs were differentially expressed by lung Tregs during resolution. Further investigation into 2 identified transcripts, Mmp12 and Sik1, revealed that Treg-specific expression of each plays a role in Treg-promoted ALI resolution. This study provides potentially novel information describing the signals that may expand resident Tregs, recruit or retain them to the lung during ALI, and modulate their function. The results provide insight into both tissue- and immune microenvironment–specific transcriptional differences through which Tregs direct their effects.

Foxp3+ Tregs increase in the lung during resolution of ALI. 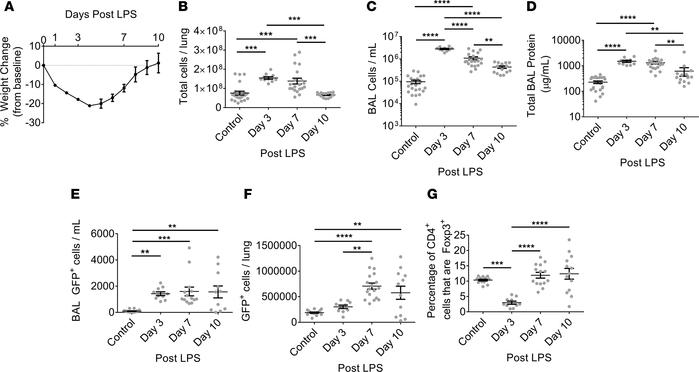