Methylmalonic acidemia (MMA), an organic acidemia characterized by metabolic instability and multiorgan complications, is most frequently caused by mutations in methylmalonyl-CoA mutase (MUT). To define the metabolic adaptations in MMA in acute and chronic settings, we studied a mouse model generated by transgenic expression of Mut in the muscle. Mut–/–;TgINS-MCK-Mut mice accurately replicate the hepatorenal mitochondriopathy and growth failure seen in severely affected patients and were used to characterize the response to fasting. The hepatic transcriptome in MMA mice was characterized by the chronic activation of stress-related pathways and an aberrant fasting response when compared with controls. A key metabolic regulator, Fgf21, emerged as a significantly dysregulated transcript in mice and was subsequently studied in a large patient cohort. The concentration of plasma FGF21 in MMA patients correlated with disease subtype, growth indices, and markers of mitochondrial dysfunction but was not affected by renal disease. Restoration of liver Mut activity, by transgenesis and liver-directed gene therapy in mice or liver transplantation in patients, drastically reduced plasma FGF21 and was associated with improved outcomes. Our studies identify mitocellular hormesis as a hepatic adaptation to metabolic stress in MMA and define FGF21 as a highly predictive disease biomarker. 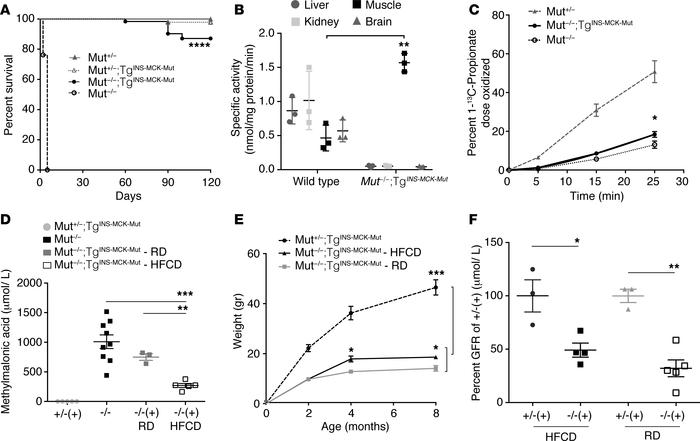