Anthracyclines are among the most effective chemotherapeutics ever developed, but they produce grueling side effects and serious adverse events, and resistance often develops over time. We found that these compounds can be sequestered by secreted cellular prion protein (PrPC), which blocks their cytotoxic activity. This effect was dose dependent using either cell line–conditioned medium or human serum as a source of PrPC. Genetic depletion of PrPC or inhibition of binding via chelation of ionic copper prevented the interaction and restored cytotoxic activity. This was more pronounced for doxorubicin than its epimer, epirubicin. Investigating the relevance to breast cancer management, we found that the levels of PRNP transcript in pretreatment tumor biopsies stratified relapse-free survival after neoadjuvant treatment with anthracyclines, particularly among doxorubicin-treated patients with residual disease at surgery. These data suggest that local sequestration could mediate treatment resistance. Consistent with this, tumor cell expression of PrPC protein correlated with poorer response to doxorubicin but not epirubicin in an independent cohort analyzed by IHC, particularly soluble isoforms released into the extracellular environment by shedding. These findings have important potential clinical implications for frontline regimen decision making. We suggest there is warranted utility for prognostic PrPC/PRNP assays to guide chemosensitization strategies that exploit an understanding of PrPC-anthracycline-copper ion complexes. 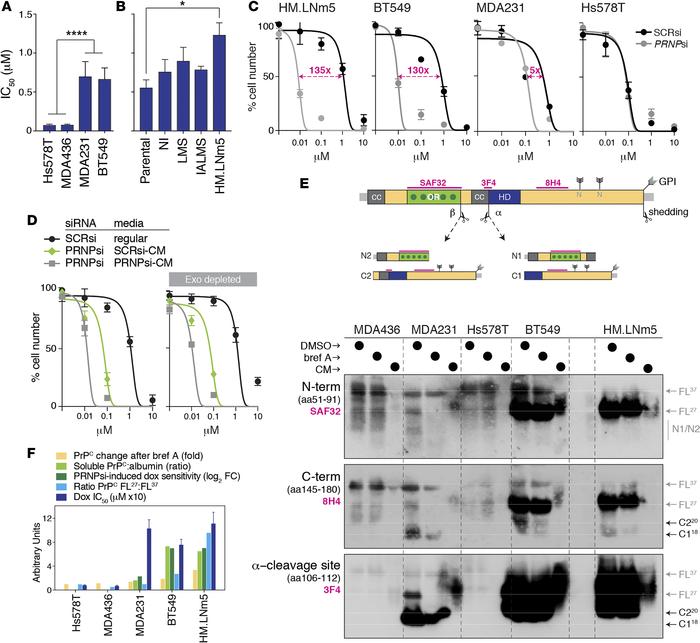