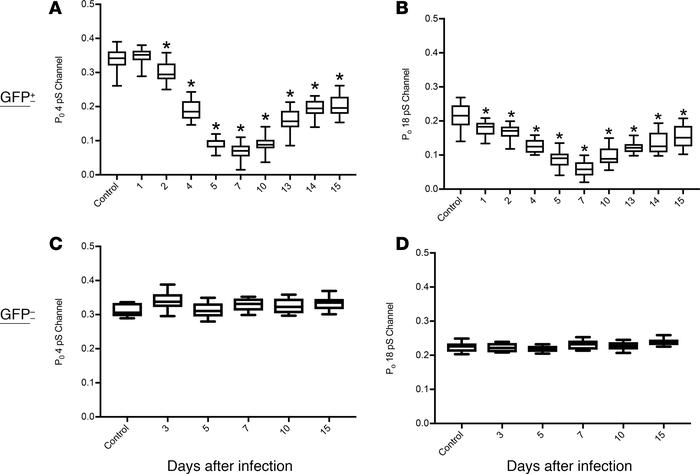 Mice were infected with 4,000 PFU of PR8ΔGFP; lungs were harvested at days 1, 2, 4, 5, 7, 10, 13, 14, and 15 p.i.; and live slices were cut using a live tissue slicer. ENaC activities in infected AT2 cells (GFP+) were recorded using cell-attached mode of the patch-clamp technique. ( and ) Reduction of ENaC open probabilities for various times after infection. = 5 mice and = 29 cells per group. The maximum inhibition was seen at day 7, after which a slow recovery of both conductances was observed. ( and ) ENaC activity, measured as open probability (Po), was not affected in noninfected cells. Data are plotted as mean open probabilities, top and bottom quartiles ± SEM. Data were analyzed by 1-way ANOVA and post hoc Bonferroni correction for multiple comparisons. * < 0.0001 for each time point compared with noninfected control values.