Deposition of amyloid-β protein (Aβ) to form neuritic plaques is the characteristic neuropathology of Alzheimer’s disease (AD). Aβ is generated from amyloid precursor protein (APP) by β- and γ-secretase cleavages. BACE1 is the β-secretase and its inhibition induces severe side effects, whereas its homolog BACE2 normally suppresses Aβ by cleaving APP/Aβ at the θ-site (Phe20) within the Aβ domain. Here, we report that BACE2 also processes APP at the β site, and the juxtamembrane helix (JH) of APP inhibits its β-secretase activity, enabling BACE2 to cleave nascent APP and aggravate AD symptoms. JH-disrupting mutations and clusterin binding to JH triggered BACE2-mediated β-cleavage. Both BACE2 and clusterin were elevated in aged mouse brains, and enhanced β-cleavage during aging. Therefore, BACE2 contributes to AD pathogenesis as a conditional β-secretase and could be a preventive and therapeutic target for AD without the side effects of BACE1 inhibition. 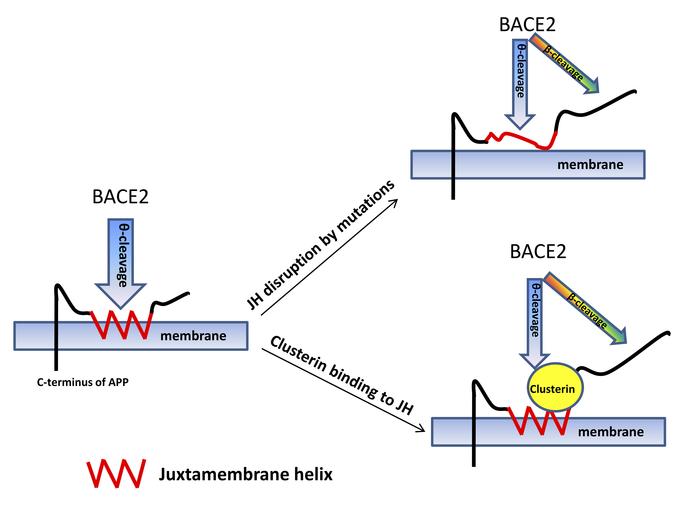