Altered response to the intestinal microbiota strongly associates with inflammatory bowel disease (IBD); however, how commensal microbial cues are integrated by the host during the pathogenesis of IBD is not understood. Epigenetics represents a potential mechanism that could enable intestinal microbes to modulate transcriptional output during the development of IBD. Here, we reveal a histone methylation signature of intestinal epithelial cells isolated from the terminal ilea of newly diagnosed pediatric IBD patients. Genes characterized by significant alterations in histone H3-lysine 4 trimethylation (H3K4me3) showed differential enrichment in pathways involving immunoregulation, cell survival and signaling, and metabolism. Interestingly, a large subset of these genes was epigenetically regulated by microbiota in mice and several microbiota-sensitive epigenetic targets demonstrated altered expression in IBD patients. Remarkably though, a substantial proportion of these genes exhibited H3K4me3 levels that correlated with the severity of intestinal inflammation in IBD, despite lacking significant differential expression. Collectively, these data uncover a previously unrecognized epigenetic profile of IBD that can be primed by commensal microbes and indicate sensitive targets in the epithelium that may underlie how microbiota predispose to subsequent intestinal inflammation and disease. 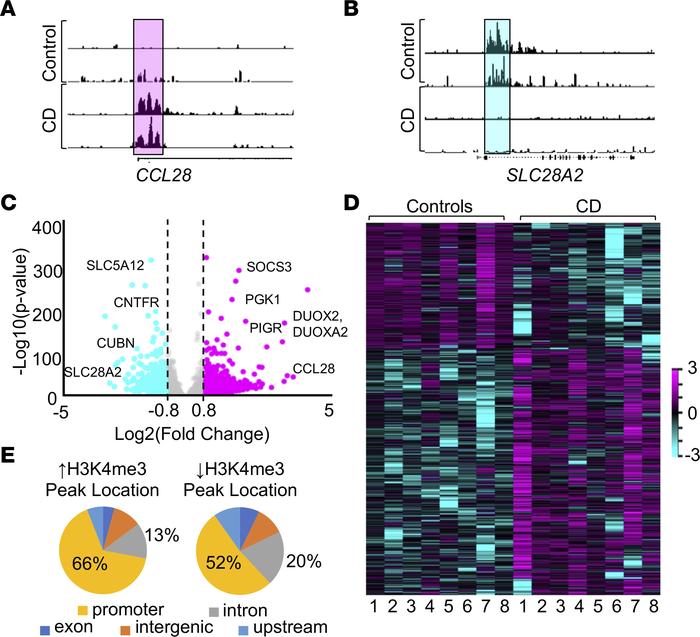