The satiety effects and metabolic actions of cholecystokinin (CCK) have been recognized as potential therapeutic targets in obesity for decades. We identified a potentially novel Ca2+-activated chloride (Cl–) current (CaCC) that is induced by CCK in intestinal vagal afferents of nodose neurons. The CaCC subunit Anoctamin 2 (Ano2/TMEM16B) is the dominant contributor to this current. Its expression is reduced, as is CCK current activity in obese mice on a high-fat diet (HFD). Reduced expression of TMEM16B in the heterozygote KO of the channel in sensory neurons results in an obese phenotype with a loss of CCK sensitivity in intestinal nodose neurons, a loss of CCK-induced satiety, and metabolic changes, including decreased energy expenditure. The effect on energy expenditure is further supported by evidence in rats showing that CCK enhances sympathetic nerve activity and thermogenesis in brown adipose tissue, and these effects are abrogated by a HFD and vagotomy. Our findings reveal that Ano2/TMEM16B is a Ca2+-activated chloride channel in vagal afferents of nodose neurons and a major determinant of CCK-induced satiety, body weight control, and energy expenditure, making it a potential therapeutic target in obesity.

CCK-8 induces thermogenesis in rats fed on control but not in rats fed HFD diet or rats with vagotomy. 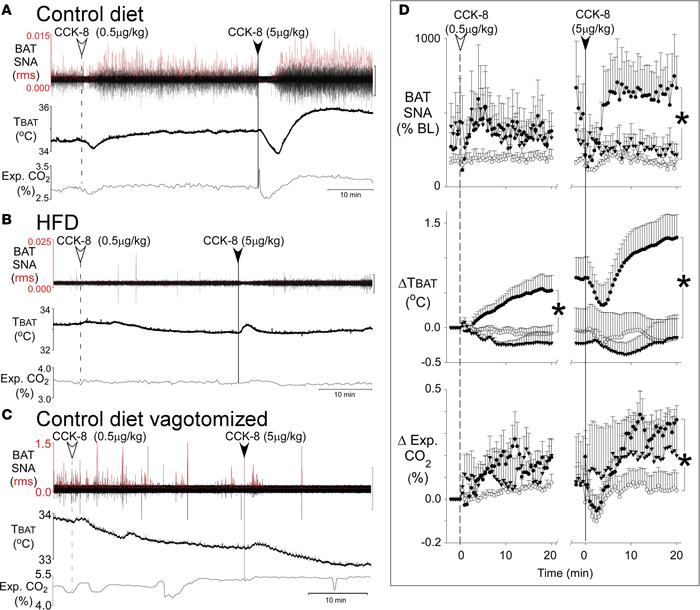