Alopecia areata (AA) is an autoimmune disease in which cytotoxic T cells specifically target growing hair follicles. We used high-throughput TCR sequencing in the C3H/HeJ mouse model of AA and in human AA patients to gain insight into pathogenic T cell populations and their dynamics, which revealed clonal CD8+ T cell expansions in lesional skin. In the C3H/HeJ model, we observed interindividual sharing of TCRβ chain protein sequences, which strongly supports a model of antigenic drive in AA. The overlap between the lesional TCR repertoire and a population of CD8+NKG2D+ T cells in skin-draining lymph nodes identified this subset as pathogenic effectors. In AA patients, treatment with the oral JAK inhibitor tofacitinib resulted in a decrease in clonally expanded CD8+ T cells in the scalp but also revealed that many expanded lesional T cell clones do not completely disappear from either skin or blood during treatment with tofacitinib, which may explain in part the relapse of disease after stopping treatment. 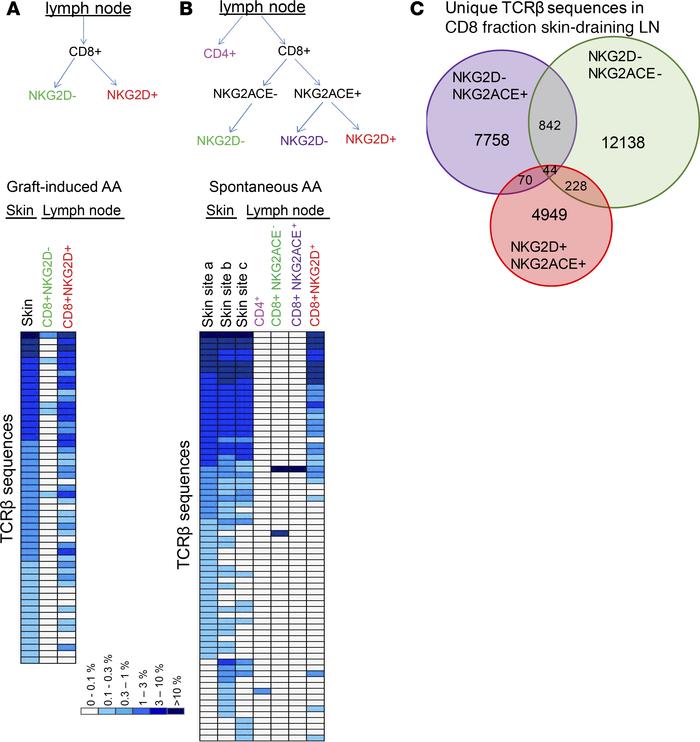