Chimeric antigen receptors (CARs) have an antigen-binding domain fused to transmembrane, costimulatory, and CD3ζ domains. Two CARs with regulatory approval include a CD28 or 4-1BB costimulatory domain. While both CARs achieve similar clinical outcomes, biologic differences have become apparent but not completely understood. Therefore, in this study we aimed to identify mechanistic differences between 4-1BB and CD28 costimulation that contribute to the biologic differences between the 2 CARs and could be exploited to enhance CAR T cell function. Using CD19-targeted CAR T cells with 4-1BB we determined that enhancement of T cell function is driven by NF-κB. Comparison to CAR T cells with CD28 also revealed that 4-1BB is associated with more antiapoptotic proteins and dependence on persistence for B cell killing. While TNF receptor–associated factor 2 (TRAF2) has been presupposed to be required for 4-1BB costimulation in CAR T cells, we determined that TRAF1 and TRAF3 are also critical. We observed that TRAFs impacted CAR T viability and proliferation, as well as cytotoxicity and/or cytokines, in part by regulating NF-κB. Our study demonstrates how 4-1BB costimulation in CAR T cells impacts antitumor eradication and clinical outcomes and has implications for enhanced CAR design. 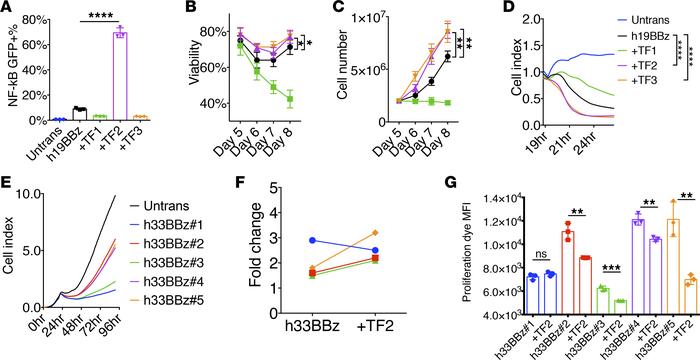