Preeclampsia (PE), associates with long-term increased risk for cardiovascular disease in women, suggesting that PE is not an isolated disease of pregnancy. It is not known if increased risk for long-term diseases is due to PE-specific factors or to prepregnancy renal and cardiovascular risk factors. We used a mouse model in which a WT female with normal prepregnancy health develops PE to investigate if preeclampsia causes long-term cardiovascular consequences after pregnancy for mothers and offspring. Mothers exhibited endothelial dysfunction and hypertension after PE and had glomerular injury that not only persisted but deteriorated, leading to fibrosis. Left ventricular (LV) remodeling characterized by increased collagen deposition and MMP-9 expression and enlarged cardiomyocytes were also detected after PE. Increased LV internal wall thickness and mass, increased end diastolic and end systolic volumes, and increased stroke volume were observed after PE in the mothers. Placenta-derived bioactive factors that modulate vascular function, markers of metabolic disease, vasoconstrictor isoprostane-8, and proinflammatory mediators were increased in sera during and after a preeclamptic pregnancy in the mother. Offspring of PE mice developed endothelial dysfunction, hypertension, and signs of metabolic disease. Microglia activation was increased in the neonatal brains after PE, suggesting neurogenic hypertension in offspring. Prevention of placental insufficiency with pravastatin prevented PE-associated cardiovascular complications in both mothers and offspring. In conclusion, factors that develop during PE have long-term, cardiovascular effects in the mother and offspring independent of prepregnancy risk factors.

Endothelial function during and after preeclampsia. 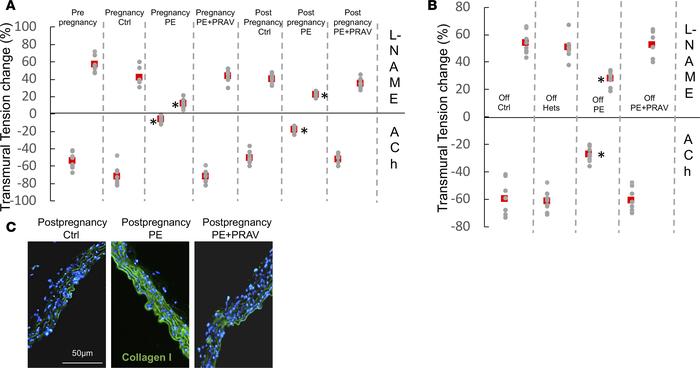