Tenofovir gel and dapivirine ring provided variable HIV protection in clinical trials, reflecting poor adherence and possibly biological factors. We hypothesized that vaginal microbiota modulates pharmacokinetics and tested the effects of pH, individual bacteria, and vaginal swabs from women on pharmacokinetics and antiviral activity. Tenofovir, but not dapivirine, uptake by human cells was reduced as pH increased. Lactobacillus crispatus actively transported tenofovir leading to a loss in drug bioavailability and culture supernatants from Gardnerella vaginalis, but not Atopobium vaginae, blocked tenofovir endocytosis. The inhibition of endocytosis mapped to adenine. Adenine increased from 65.5 μM in broth to 246 μM in Gardnerella, but decreased to 9.5 μM in Atopobium supernatants. This translated into a decrease in anti-HIV activity when Gardnerella supernatants or adenine were added to cultures. Dapivirine was also impacted by microbiota, as drug bound irreversibly to bacteria, resulting in decreased antiviral activity. When drugs were incubated with vaginal swabs, 30.7% ± 5.7% of dapivirine and 63.9% ± 8.8% of tenofovir were recovered in supernatants after centrifugation of the bacterial cell pellet. In contrast, no impact of microbiota on the pharmacokinetics of the prodrugs, tenofovir disoproxil fumarate or tenofovir alafenamide, was observed. Together, these results demonstrate that microbiota may impact pharmacokinetics and contribute to inconsistent efficacy.

Impact of pH on drug uptake by human cells. 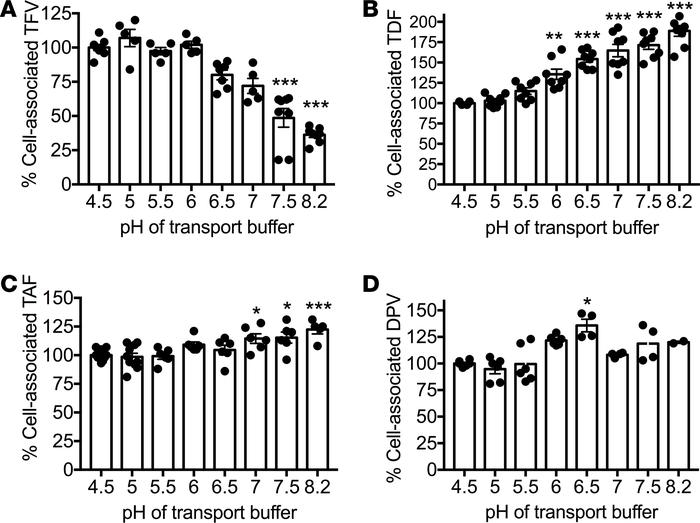