T cell receptor (TCR) T cell therapy is a promising cancer treatment modality. However, its successful development for epithelial cancers may depend on the identification of high-avidity TCRs directed against tumor-restricted target antigens. The human papillomavirus (HPV) E7 antigen is an attractive therapeutic target that is constitutively expressed by HPV+ cancers but not by healthy tissues. It is unknown if genetically engineered TCR T cells that target E7 can mediate regression of HPV+ cancers. We identified an HPV-16 E7-specific, HLA-A*02:01-restricted TCR from a uterine cervix biopsy from a woman with cervical intraepithelial neoplasia. This TCR demonstrated high functional avidity, with CD8 coreceptor–independent tumor targeting. Human T cells transduced to express the TCR specifically recognized and killed HPV-16+ cervical and oropharyngeal cancer cell lines and mediated regression of established HPV-16+ human cervical cancer tumors in a mouse model. These findings support the therapeutic potential of this approach and established the basis for an E7 TCR gene therapy clinical trial in patients with metastatic HPV+ cancers (NCT02858310). 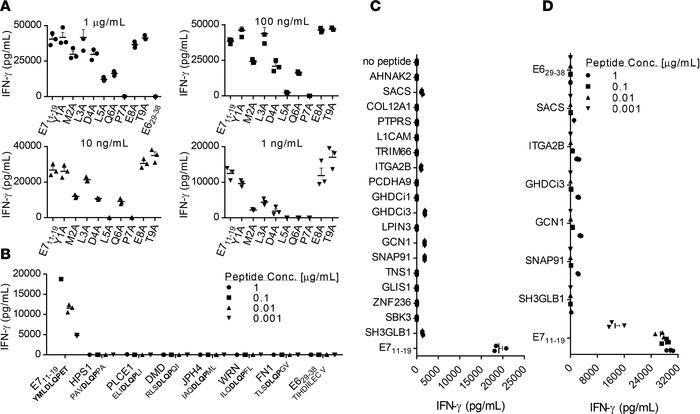 The assays shown were performed by coculture of E7 TCR T cells with T2 cells pulsed with the peptide indicated on the axis. Coculture supernatants were harvested after 18–24 hours, and the IFN-γ concentration was measured by ELISA. Error bars represent the SEM of 3 technical replicates. () To guide cross-reactivity testing, alanine scanning of the E711–19 epitope was performed. An alanine residue was substituted for the native residue at each position of the E711–19 (YMLDLQPET) peptide. The residue substitutions are shown on the axis. The peptide concentration is indicated above each bar graph. () Based on the findings in , the amino acids at positions 4–7 (DLQP) were determined to primarily mediate E7 TCR recognition of E711–19. Position 2 also affected recognition, presumably due to its role as an HLA-A*02:01 anchor. A BLAST search was conducted to identify human peptides that share these 4 amino acids at the same positions and an HLA-A*02:01 anchor residue at positions 2 (L, M, T, or A) and 9 (V, I, L, T, or A) (). E7 TCR T cells were tested for reactivity against T2 cells loaded with each of these peptides at the concentration indicated. () E7 TCR T cells were tested for recognition of a panel of human peptides that share either 6 residues or 5 residues plus a conservative substitution with E711–19. Target cells were loaded with 1 μg/ml peptide. () E7 TCR T cells were retested for reactivity against peptides identified as possibly reactive in . The peptide concentrations are indicated.