BACKGROUND. A defining pathophysiologic feature of sepsis is profound apoptosis-induced death and depletion of CD4+ and CD8+ T cells. Interleukin-7 (IL-7) is an antiapoptotic common γ-chain cytokine that is essential for lymphocyte proliferation and survival. Clinical trials of IL-7 in over 390 oncologic and lymphopenic patients showed that IL-7 was safe, invariably increased CD4+ and CD8+ lymphocyte counts, and improved immunity. METHODS. We conducted a prospective, randomized, double-blind, placebo-controlled trial of recombinant human IL-7 (CYT107) in patients with septic shock and severe lymphopenia. Twenty-seven patients at academic sites in France and the United States received CYT107 or placebo for 4 weeks. Primary aims were to determine the safety of CYT107 in sepsis and its ability to reverse lymphopenia. RESULTS. CYT107 was well tolerated without evidence of inducing cytokine storm or worsening inflammation or organ dysfunction. CYT107 caused a 3- to 4-fold increase in absolute lymphocyte counts and in circulating CD4+ and CD8+ T cells that persisted for weeks after drug administration. CYT107 also increased T cell proliferation and activation. CONCLUSIONS. This is the first trial of an immunoadjuvant therapy targeting defects in adaptive immunity in patients with sepsis. CYT107 reversed the marked loss of CD4+ and CD8+ immune effector cells, a hallmark of sepsis and a likely key mechanism in its morbidity and mortality. CYT107 represents a potential new way forward in the treatment of patients with sepsis by restoring adaptive immunity. Such immune-based therapy should be broadly protective against diverse pathogens including multidrug resistant bacteria that preferentially target patients with impaired immunity. TRIAL REGISTRATION. Trials registered at clinicaltrials.gov: NCT02640807 and NCT02797431. FUNDING. Revimmune, NIH National Institute of General Medical Sciences GM44118. 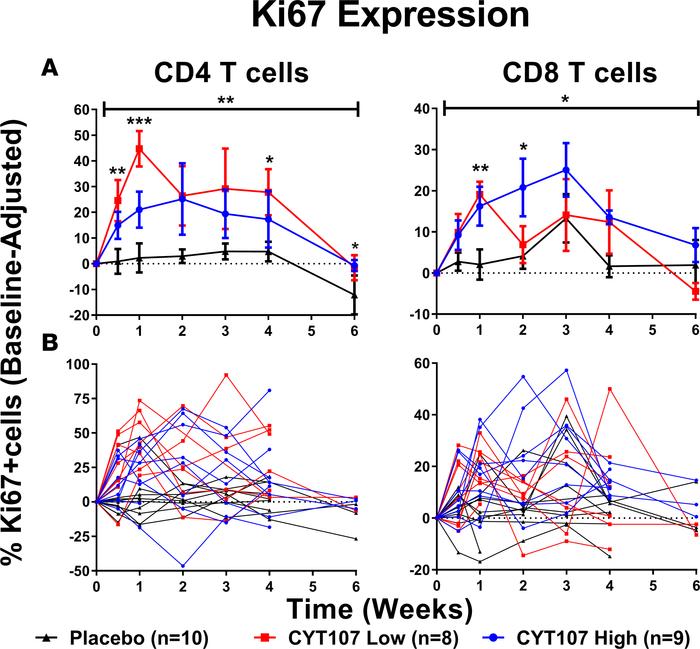 () CYT107 increased the percentage of Ki67-positive CD4+ and CD8+ T cells from approximately 10% at pre–CYT107 treatment to approximately 46% and 22%, respectively, on average for both CYT107 treatment groups. In contrast, there was no significant change in the percentage of cells that were Ki67 positive in placebo-treated patients. There was an overall treatment effect on Ki67 in both CD4+ and CD8+ T cells, individually showing an effect of low-dose CYT107 therapy to increase Ki67 in CD4+ T cells and both regimens to increase Ki67 in CD8+ T cells as compared with placebo. Additionally, in CD4+ T cells the low-frequency group displayed increased Ki67 at days 4, 8, 22, 29, and 42, while in CD8+ T cells, the high-frequency group showed increases at days 15 and 29, and both treatment groups at day 8 as compared with placebo. * 0.05, ** 0.01. Statistical tests were conducted using a Wald-type multiple-degree-of-freedom method. Values reported are mean ± SEM. = 10, 8, and 9 for placebo, low-frequency CYT107, and high-frequency CYT107-treated patients, respectively. () The effect of CYT107 on lymphocyte proliferation, as determined by flow cytometric quantification of Ki67, is provided for each patient. US study patients had flow cytometric quantification of Ki67 for 6 weeks, while French study patients had flow cytometric quantification out to 4 weeks only. Baseline adjustment reflects the difference between study day values and the predosing values.