Neutrophils dominate the early immune response in pathogen-induced acute lung injury, but efforts to harness their responses have not led to therapeutic advancements. Neutrophil extracellular traps (NETs) have been proposed as an innate defense mechanism responsible for pathogen clearance, but there are concerns that NETs may induce collateral damage to host tissues. Here, we detected NETs in abundance in mouse models of severe bacterial pneumonia/acute lung injury and in human subjects with acute respiratory distress syndrome (ARDS) from pneumonia or sepsis. Decreasing NETs reduced lung injury and improved survival after DNase I treatment or with partial protein arginine deiminase 4 deficiency (PAD4+/–). Complete PAD4 deficiency (PAD4–/–) reduced NETs and lung injury but was counterbalanced by increased bacterial load and inflammation. Importantly, we discovered that the lipoxin pathway could be a potent modulator of NET formation, and that mice deficient in the lipoxin receptor (Fpr2–/–) produced excess NETs leading to increased lung injury and mortality. Lastly, we observed in humans that increased plasma NETs were associated with ARDS severity and mortality, and lower plasma DNase I levels were associated with the development of sepsis-induced ARDS. We conclude that a critical balance of NETs is necessary to prevent lung injury and to maintain microbial control, which has important therapeutic implications. 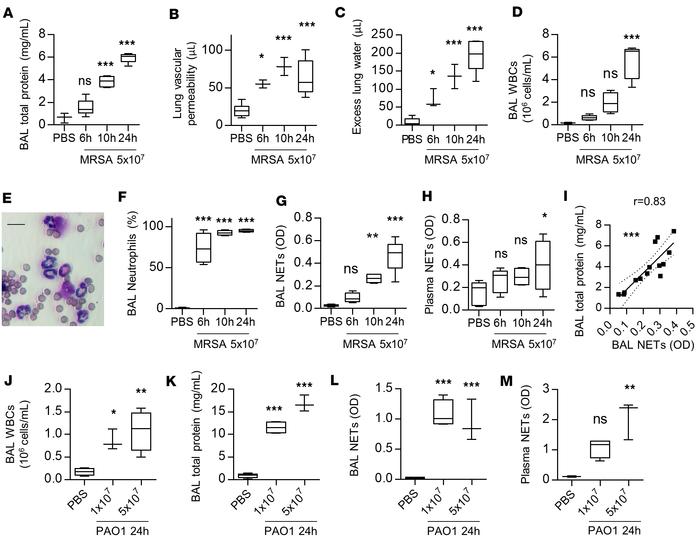