B cells play a central role in systemic lupus erythematosus (SLE) pathophysiology but dysregulated pathways leading to a break in B cell tolerance remain unclear. Since Toll-like receptor 9 (TLR9) favors the elimination of autoreactive B cells in the periphery, we assessed TLR9 function in SLE by analyzing the responses of B cells and plasmacytoid dendritic cells (pDCs) isolated from healthy donors and patients after stimulation with CpG, a TLR9 agonist. We found that SLE B cells from patients without hydroxychloroquine treatment displayed defective in vitro TLR9 responses, as illustrated by the impaired upregulation of B cell activation molecules and the diminished production of various cytokines including antiinflammatory IL-10. In agreement with CD19 controlling TLR9 responses in B cells, decreased expression of the CD19/CD21 complex on SLE B cells was detected as early as the transitional B cell stage. In contrast, TLR7 function was preserved in SLE B cells, whereas pDCs from SLE patients properly responded to TLR9 stimulation, thereby revealing that impaired TLR9 function in SLE was restricted to B cells. We conclude that abnormal CD19 expression and TLR9 tolerogenic function in SLE B cells may contribute to the break of B cell tolerance in these patients. 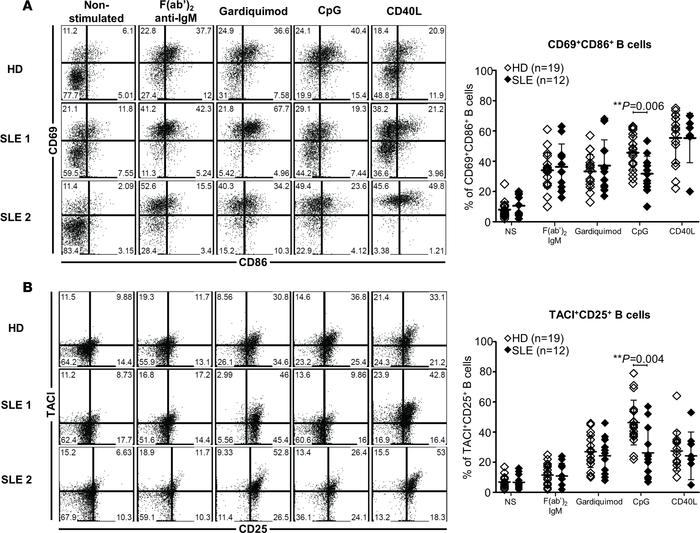