NK cell activation has been shown to be metabolically regulated in vitro; however, the role of metabolism during in vivo NK cell responses to infection is unknown. We examined the role of glycolysis in NK cell function during murine cytomegalovirus (MCMV) infection and the ability of IL-15 to prime NK cells during CMV infection. The glucose metabolism inhibitor 2-deoxy-ᴅ-glucose (2DG) impaired both mouse and human NK cell cytotoxicity following priming in vitro. Similarly, MCMV-infected mice treated with 2DG had impaired clearance of NK-specific targets in vivo, which was associated with higher viral burden and susceptibility to infection on the C57BL/6 background. IL-15 priming is known to alter NK cell metabolism and metabolic requirements for activation. Treatment with the IL-15 superagonist ALT-803 rescued mice from otherwise lethal infection in an NK-dependent manner. Consistent with this, treatment of a patient with ALT-803 for recurrent CMV reactivation after hematopoietic cell transplant was associated with clearance of viremia. These studies demonstrate that NK cell–mediated control of viral infection requires glucose metabolism and that IL-15 treatment in vivo can reduce this requirement and may be effective as an antiviral therapy. 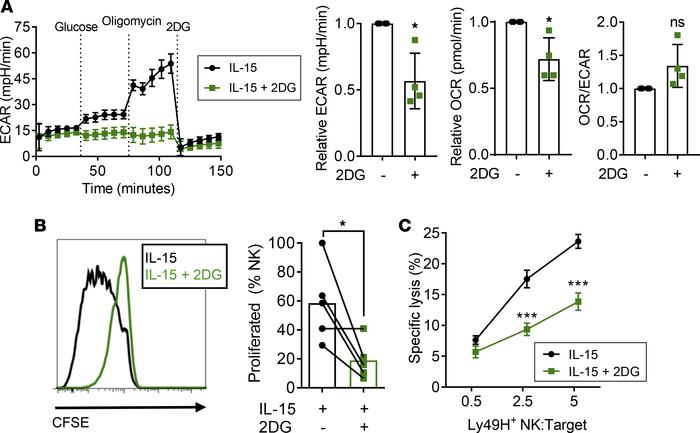