We previously showed that Th1/type 1 inflammation marked by increased IFN-γ levels in the airways can be appreciated in 50% of patients with severe asthma, despite high dose corticosteroid (CS) treatment. We hypothesized that a downstream target of IFN-γ, CXCL10, which recruits Th1 cells via the cognate receptor CXCR3, is an important contributor to Th1high asthma and CS unresponsiveness. We show high levels of CXCL10 mRNA closely associated with IFNG levels in the BAL cells of 50% of severe asthmatics and also in the airways of mice subjected to a severe asthma model, both in the context of high-dose CS treatment. The inability of CS to dampen IFNG or CXCL10 expression was not because of impaired nuclear translocation of the glucocorticoid receptor (GR) or its transactivational functions. Rather, in the presence of CS and IFN-γ, STAT1 and GR were recruited on critical regulatory elements in the endogenous CXCL10 promoter in monocytes, albeit without any abatement of CXCL10 gene expression. High CXCL10 gene expression was also associated with a mast cell signature in both humans and mice, CXCR3 being also expressed by mast cells. These findings suggest that the IFN-γ–CXCL10 axis plays a central role in persistent type 1 inflammation that may be facilitated by CS therapy through GR-STAT1 cooperation converging on the CXCL10 promoter.

expression is elevated in severe asthma and associated with poor asthma control. 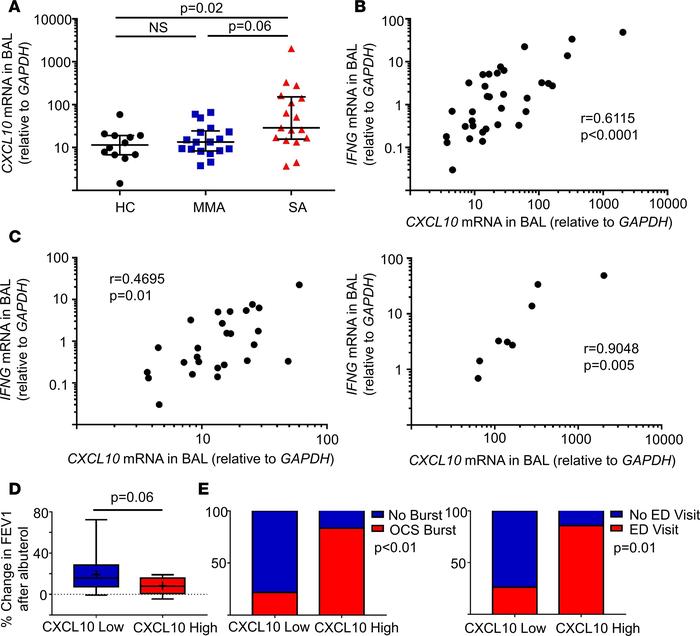 () mRNA expression was measured in BAL cells obtained from patients with mild-moderate asthma (MMA, = 18), severe asthma (SA, = 17), and healthy controls (HC, = 12). () mRNA levels in BAL cells were compared with mRNA levels in all patients with asthma ( = 35). () A cut-off for CXCL10 was set at 3 SDs above the healthy control mean (CXCL10 Low = 27, CXCL10 High = 8 [all SA patients]); mRNA levels in BAL cells were compared with mRNA levels in each group. () FEV1 was compared before and after 6 puffs of albuterol to obtain a percent change after albuterol administration. () Patients were asked about need for oral corticosteroid burst (OCS burst; CXCL10 Low, = 27; CXCL10 High, = 7) and emergency department visit (ED Visit; CXCL10 Low, = 26; CXCL10 High, = 6) in the prior 12 months; data shown as percent of total. Error bars represent median and quartile range () or range with quartile range and median, ± mean (). Kruskal-Wallis with Dunn’s posthoc test for multiple comparisons (), Spearman’s correlation ( and ), Mann-Whitney test () and Fisher’s Exact Test () were used.