Myasthenia gravis (MG) is a B cell–mediated autoimmune disorder of neuromuscular transmission. Pathogenic autoantibodies to muscle-specific tyrosine kinase (MuSK) can be found in patients with MG who do not have detectable antibodies to the acetylcholine receptor (AChR). MuSK MG includes immunological and clinical features that are generally distinct from AChR MG, particularly regarding responsiveness to therapy. B cell depletion has been shown to affect a decline in serum autoantibodies and to induce sustained clinical improvement in the majority of MuSK MG patients. However, the duration of this benefit may be limited, as we observed disease relapse in MuSK MG patients who had achieved rituximab-induced remission. We investigated the mechanisms of such relapses by exploring autoantibody production in the reemerging B cell compartment. Autoantibody-expressing CD27+ B cells were observed within the reconstituted repertoire during relapse but not during remission or in controls. Using two complementary approaches, which included production of 108 unique human monoclonal recombinant immunoglobulins, we demonstrated that antibody-secreting CD27hiCD38hi B cells (plasmablasts) contribute to the production of MuSK autoantibodies during relapse. The autoantibodies displayed hallmarks of antigen-driven affinity maturation. These collective findings introduce potential mechanisms for understanding both MuSK autoantibody production and disease relapse following B cell depletion. 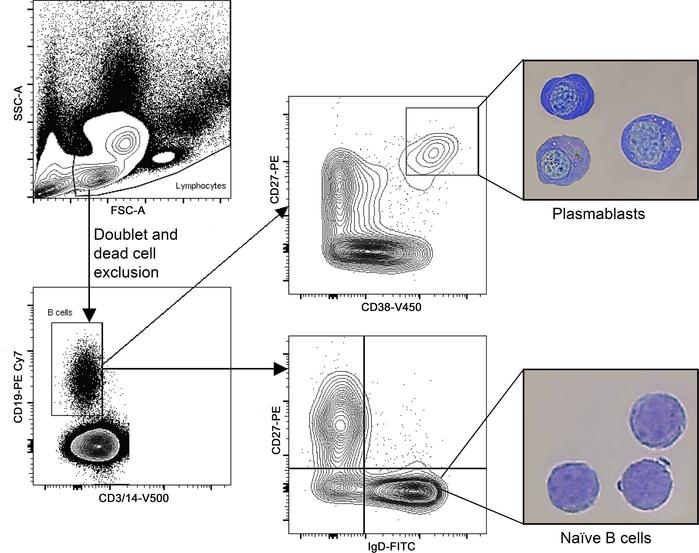 A representative example of the plasmablast population sorting strategy is shown. PBMCs were initially gated in the SSC/FSC graph (upper left). The SSC/FSC gate was determined based on plasmablast back-gating (not shown). After doublet and dead cell exclusion, CD19+CD3–CD14– cells were gated as B cells (lower left). Plasmablasts were subsequently gated from the B cell gate as CD27hiCD38hi cells (upper right). Naive B cells were defined as IgD+CD27– B cells (lower right). Morphological analysis (400× magnification) is shown for plasmablasts (upper picture) and naive B cells (lower picture). Plasmablasts display an eccentric nucleus, perinuclear region, prominent nucleoli, and abundant cytoplasm. In contrast, naive B cells display a large nucleus with a thin rim of cytoplasm. These results were replicated in a repeat experiment. FSC, forward scatter; PBMC, peripheral blood mononuclear cells; SSC, side scatter.