Crystal structures of the ACC1Fab-peptide complexes. 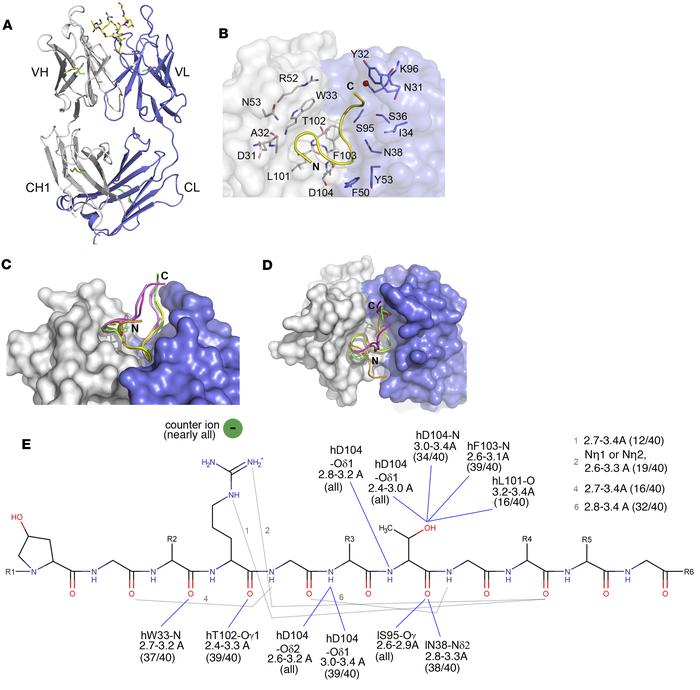 () The ACC1Fab heavy and light chains are shown in white and blue, respectively. The bound C1-CIT365-L peptide (yellow sticks) is in the paratope formed by 3 CDR loops from each heavy and light chain of the ACC1Fab. The variable and constant domains of both chains (VH, VL, CH1, and CL) each contain a disulfide bond, shown as sticks with carbon atoms in green and sulfur atoms in yellow. () The dimensions of the paratope are outlined by the semitransparent molecular envelope of the ACC1Fab, which is colored white for the heavy chain and blue for the light chain. The bound C1-CIT365-L peptide is depicted in yellow, and all ACC1 residues located within a 4-Å radius from the peptide are depicted as sticks with carbon atoms in white or light blue in accordance with heavy or light chain origin; oxygen atoms are depicted in red, and nitrogen atoms are depicted in blue. ( and ) Comparison of the peptide-binding modes, with the paratopes viewed from the side () and the top (). The 5 ACC1Fab-peptide complexes were superimposed based on the heavy-chain variable domain. The molecular envelope of the ACC1Fab is colored as in , bound peptides are shown in yellow (C1-CIT365-L), orange (C1-CIT365-T), magenta (CII538-591 in the crystal of space group P212121), mauve (CII538-591 in P1), and green (CII616-639-CIT). The orientation of the peptides is indicated by labeling of their N- and C-termini. () Schematic presentation of peptide-binding site in ACC1Fab. The nonconserved side chains (R2-R5) and invisible parts in electron density (R1, R6) are abbreviated. Only hydrogen bonds observed in at least a third of the 40 analyzed ACC1Fab-peptide complexes are shown. Intrapeptide hydrogen bonds are indicated by black dotted lines, hydrogen bonds between the peptide and the Fab are indicated as solid blue lines. The heavy- or light-chain origin is indicated by an h or l suffix, respectively. The counter ion of unknown type is indicated by a green circle. CDR, complementarity-determining region; Fab, antigen-binding fragment; VH, heavy-chain variable domain; VL, light chain variable domain; CH1, heavy-chain constant domain; CL, light-chain constant domain.