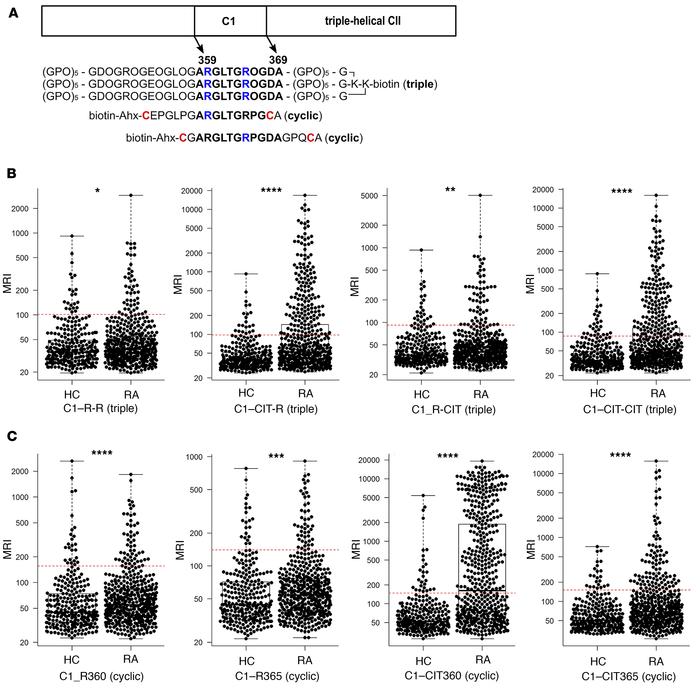 () The sequence of synthetic C1 epitope (CII259-269) variants. The lysine knot placed at the C terminus establishes the requisite register for triple-helix formation with the identical peptide strands, whereas two cysteine residues were added to a single α chain to achieve cyclization via disulfide bonds. Biotin was added to all peptides, as indicated for detection in Luminex assay. The corresponding citrullinated peptides have the same sequence, aside from substitution of arginine with citrulline residues at the given position, i.e., 360 and 365. O, (2S,4R)-4-hydroxyproline; Ahx, aminocaproic acid. ( and ) IgG response of the TIRA2 cohort (504 RA patients and 285 healthy controls) to peptides containing variants of the triple-helical C1 epitope () or to the cyclic α chain of the C1 epitope (). All biotinylated peptides were captured on beads via recognition of NeutrAvidin, which was immobilized on the beads through amine coupling. Human serum samples were diluted 1:100 (v/v) in assay buffer and incubated for 60 minutes at room temperature on a shaker for preadsorption of unspecific antibodies. Then, the serum samples were transferred to a 384-well plate containing peptide-coated beads. After incubation at room temperature on a shaker for 75 minutes, all beads were washed with PBS-T and resuspended in a solution containing the secondary anti-human IgG Fcy-PE. After 40 minutes of incubation, the beads were washed with PBS-T and then measured. The median fluorescence intensity (MFI) was used to quantify the interaction of serum antibody with the given peptides. The red line indicates the cutoff value for positivity as described in the Methods. Mann-Whitney test was used to calculate values for differences between groups (* < 0.05, ** < 0.01, *** < 0.001, **** < 0.0001). The red line indicates the cutoff (median + 5 × median absolute deviation [MAD]) based on healthy controls. MFI, median fluorescence intensity; RA, rheumatoid arthritis; HC, healthy controls; RT, room temperature.