BACKGROUND. The effect of gene expression data on diagnosis remains limited. Here, we show how diagnosis and classification of growth hormone deficiency (GHD) can be achieved from a single blood sample using a combination of transcriptomics and random forest analysis. METHODS. Prepubertal treatment-naive children with GHD (n = 98) were enrolled from the PREDICT study, and controls (n = 26) were acquired from online data sets. Whole blood gene expression was correlated with peak growth hormone (GH) using rank regression and a random forest algorithm tested for prediction of the presence of GHD and in classification of GHD as severe (peak GH <4 μg/l) and nonsevere (peak ≥4 μg/l). Performance was assessed using area under the receiver operating characteristic curve (AUC-ROC). RESULTS. Rank regression identified 347 probe sets in which gene expression correlated with peak GH concentrations (r = ± 0.28, P < 0.01). These 347 probe sets yielded an AUC-ROC of 0.95 for prediction of GHD status versus controls and an AUC-ROC of 0.93 for prediction of GHD severity. CONCLUSION. This study demonstrates highly accurate diagnosis and disease classification for GHD using a combination of transcriptomics and random forest analysis. TRIAL REGISTRATION. NCT00256126 and NCT00699855. FUNDING. Merck and the National Institute for Health Research (CL-2012-06-005).

Heatmap of gene expression for those probe sets whose expression correlated with peak GH levels. 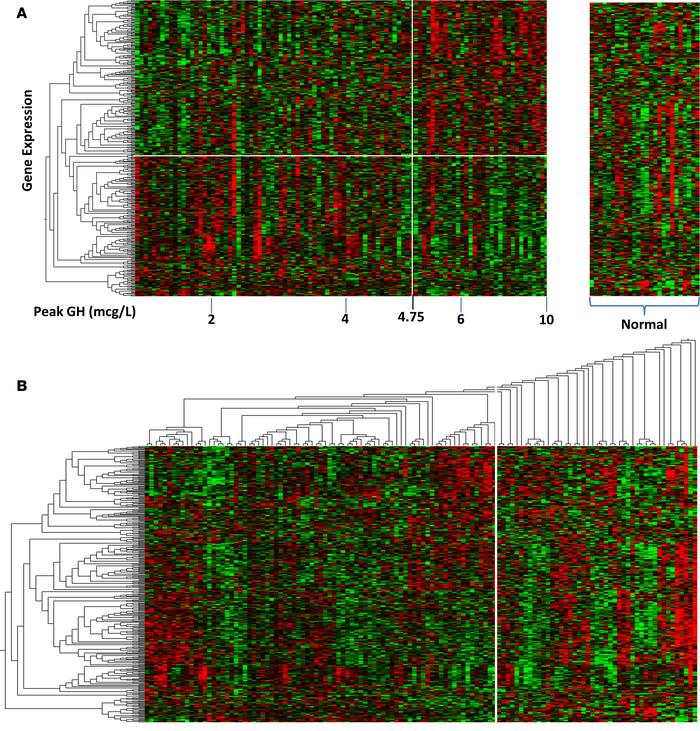 () Normal children ( = 26) were combined with GHD patients ( = 98), rank regression analysis was adjusted for sex and age as covariates, and clusters of similar gene expression were identified using the Euclidean metric and marked using a dendrogram and white boxes (347 probe sets, 271 unique genes). The distinction between normal subjects is marked by the break in the heatmap; GHD is defined by a cutoff level of 10 μ/l growth hormone, as measured by provocation testing. The vertical white line demarcates the point of inflexion for gene expression at a peak GH level of 4.75 μ/l, while the horizontal white line demarcates those probe sets positively and negatively associated with peak GH levels (< or >4.75 μ/l). () Two-way cluster analysis of gene expression in GHD and control subjects. Four distinct clusters of GHD subgroups can be seen from the dendrogram on the horizontal axis derived via a Euclidian metric. There is, however, a large number of subjects it was not possible to classify (right of white line). This group contained all but 1 of the normal control subjects and 20 GHD subjects.